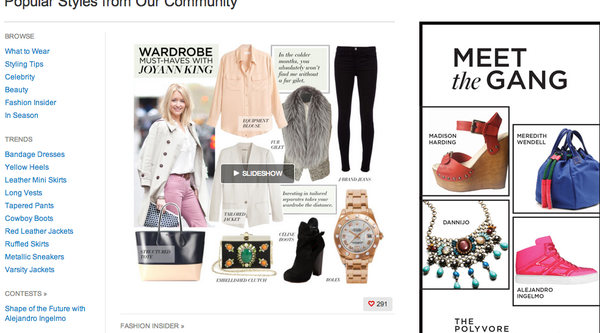 (NEW YORK) Up-and-coming designers take note: Social e-comm site, Polyvore, has officially launched “Design Collective” for brands on the verge of a breakthrough. The virtual platform was quietly developed six months ago to give emerging talent an extra boost toward commercial bliss by promoting them front and center on the site, and it’s garnering some serious attention.

Who took the stage first? Alejandro Ingelmo, Dannijo, Madison Harding, and Meredith Wendell. So far the explosive exposure of Polyvore’s 20 million unique monthly visitors has prompted Harding and Wendell to launch e-comm sites of their own to handle the demand that’s been directed to their brand sites since June. Likewise, Ingelmo says Polyvore has become his “number one source of traffic” providing 50 percent of his referrals.

“Established brands and retailers such as H&M, Net-a-Porter, American Eagle and Mercedes Benz have partnered with Polyvore to increase user engagement, raise brand awareness, and drive highly commercial traffic to their websites,” said Polyvore CEO Jess Lee in an official statement. “Designer Collective helps up-and-coming brands, who may not have huge ad budgets, gain exposure for their brand and take their business to the next level.”

Shot of The Daily: Ruffian's On Ice