The Coach Revolution: Stuart Vevers on the Brand’s Transformation 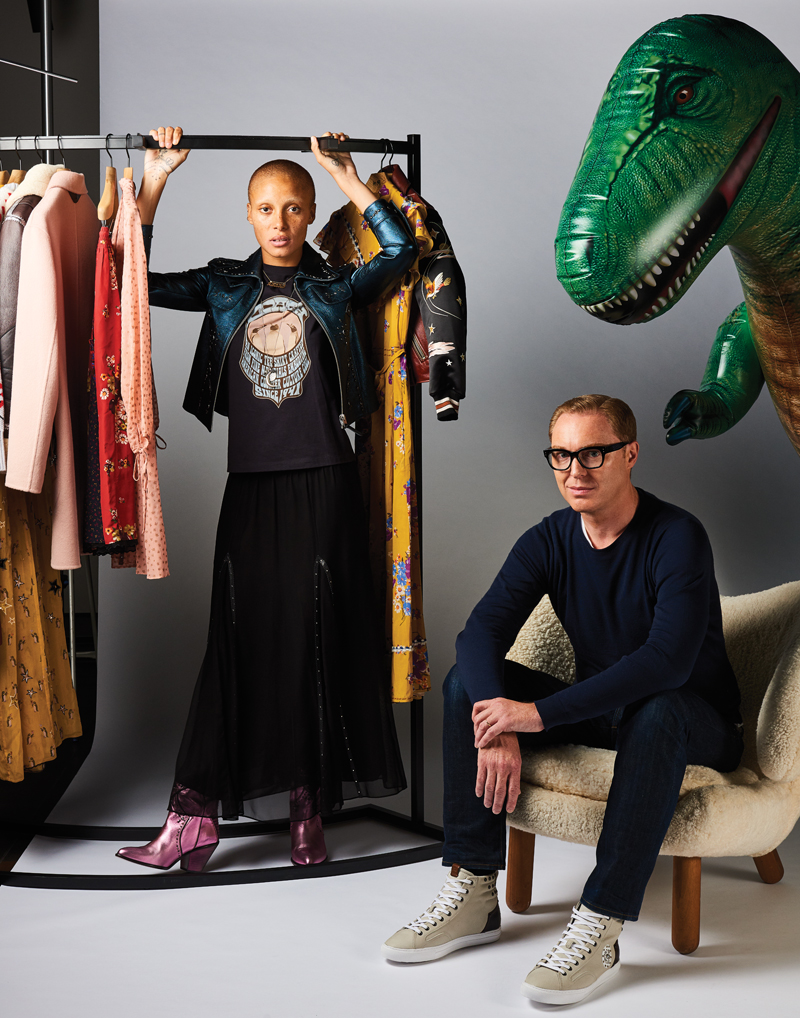 We can almost count on our hands these days the number of designers who enter a house and manage to completely turn it upside down…for the better. Stuart Vevers, executive creative director of Coach, has mastered that particular transformation. His whimsical approach to design (complete with rexy the dino!) has ensured that this American powerhouse is back where it rightfully belongs—on top.

You’ve been here a few seasons now. Is the brand where you want it to be?
I’m really proud of what we’ve achieved, but there’s never an end to my ambitions. First and foremost, Coach is a fashion house, and that’s one of the things I’m most proud of. We will always be most known for our leather goods—I see Coach as America’s original house of leather—but a shearling coat is now as much a part of Coach as a saddlebag.

Can you give us some hints on the Spring collection?
It’s going to be a real celebration of New York City—obviously, Coach’s home for the past 76 years and more recently, my own home as well. Expect a celebration of the individuality and self-expression that the city is about.

What do you love about this town?
It’s a city of characters. Wherever you turn, people are being themselves and celebrating their uniqueness. It’s also a super international city, which I love.

We hear you’ve moved to Tribeca. Do you miss the West Village?
I loved being there, but I guess wherever you live you start to explore new areas. I do miss Bank Street, because pretty much every day I walked to and from work, mostly along the High Line. It felt like a luxury to be able to do that. Now I walk home along the river and it’s really beautiful.

Be careful of the cyclists on the West Side Highway!
[Laughs] It is terrifying!

While we wait for Spring, talk us through the Fall collection.
I like to play with juxtaposition to create attention. For Fall, my biggest influence was this very nostalgic, romantic, cinematic view of the great American landscapes. The American prairie has been a recurring reference for me—think Terrence Malick’s Days of Heaven. I was also influenced by the book Back in the Days, with photos by Jamel Shabazz, which highlighted the real beginnings of hip-hop in New York City. I loved the way [those artists] were putting looks together from their surroundings—very resourceful. This interesting tension between the prairie and hip-hop resulted in coats that are part puffer, part bedspread-inspired quilting. This also introduced some of our quite ironic play with our dinosaur, Rexy, who pulls the Coach carriage.

Are you surprised that Rexy has become a thing?
That wasn’t our plan—there was no strategy there. I’m drawn to working with people who like to laugh and have fun, and Rexy definitely came about in one of those moments in the creative process! Now she’s become a Coach mascot and has her own celebrity following—Selena Gomez, James Franco, Julia Roberts, Kate Moss, Zayn Malik, Michael B. Jordan.

Chicest dino that’s ever lived! Will we see more of her?
The center atrium of Coach House [at 685 Fifth Avenue] houses a 12-foot sculpture of Rexy designed by renowned artist Billie Achilleos. It’s constructed entirely from Coach bags and proprietary hardware. We continue to play with Rexy in the collections. In pre-Spring, there is also a shark, which we called Sharky. And they’ve been joined by a new friend, Uni!

Your shows are very impactful. Why is a major production so important?
The first collection came together quickly, and I feel fortunate that the stars were aligned. It generated a really positive reaction, and that gave me the confidence to push my vision for Coach forward. Showing during New York Fashion Week was really my chance to say, “You know, look things are changing, things are happening. This is a new day for Coach.” And that’s why it’s been really important to show it.

Why was Selena Gomez the right fit for your campaign?
The words I use to describe Selena are the same words that I use when I talk about Coach—honest, authentic—and she has a certain effortlessness. Selena makes a real point of being close to her fans. There’s a reason why she has such a strong following in the world of social media. She’s also really lovely, fun, charming, beautiful. One of the things that Selena has done with us is be a supporter of a group called Step Up, which is all about empowerment of young women through mentorship and education.

You have a collaboration with her out this month.
It was super fun. Selena is obviously very creative, and we sat down [to conceptualize it] as two creatives. I brought the knowledge of leather goods; I worked with her to really figure out what she would want to use. It was very personal. Then we talked a lot about how we would make this really unique to her. It has a lot of personal touches—an empowering phrase that she wrote that’s inside the bag, for example. We played, pulled out swatches, and had a real laugh. She really wanted to understand how the process worked and wanted to see all the stages, and that made the experience authentic.

Do you have a favorite Selena Gomez jam?
It’s a tie between “Fetish” and “Bad Liar.”

Why did you pick Steven Meisel to shoot the campaign?
He was my first and only choice. I don’t have to explain the level and quality of his work. I wanted to convey that Coach was about celebrating a down-to-earth and honest approach to luxury. I’m not interested in some fashion fantasy lifestyle! I felt like Steven was the only choice for making that “everyday feel” seem super special, and giving it that kind of finesse that his work has.

Did you go on set?
I’ve been on every single shoot, but I believe if you’re working with people of that level, you’ve got to give them space to follow their own instinct. I wouldn’t like someone standing over me while I’m trying to create something.

Your casting is always excellent. Who are your muses?
I’ve worked a lot with Lexi [Boling]. She was in that first presentation for Coach, and we’ve done loads of things together. I love Chloë Grace Moretz, Zoë Kravitz…I’m definitely drawn to people who have something to say and a point of view. Of course, Adwoa [Aboah]—I’ve known her for well over a decade.

Was she modeling at the time?
No. She was a little girl—she could have been 8 or 9. She and her sister, Kesewa, were in the last Coach show together, and I thought that was really charming. I loved seeing them together backstage.

Hudson Yards is a spectacular complex, and you’re the top dog at Coach. Does that intimidate you in any way?
I guess it reinforces my responsibility. I love what I do and I’m proud of what I’ve achieved. I do my best, and I think you’ve got to follow your instinct, your passion, and what you believe in. At Coach, I’m able to share my work with more people, and that’s a pleasure. ß