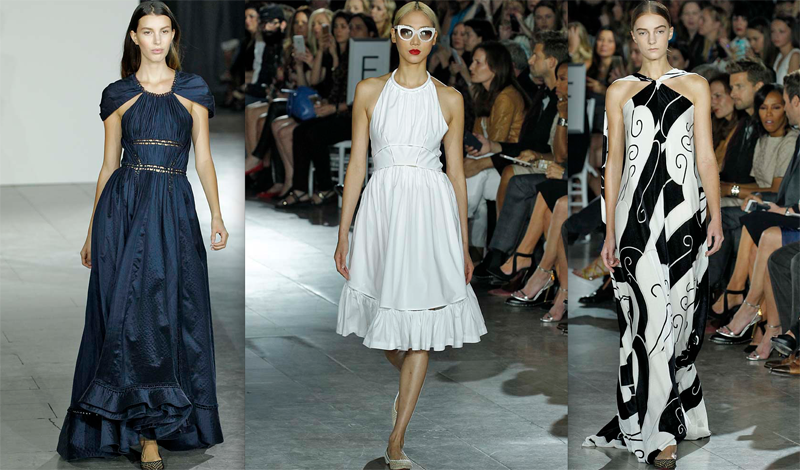 “I know it’s going to be grand, and feminine, and beautiful,” Christina Hendricks predicted before the start of Zac Posen’s grand runway show at Grand Central yesterday. “So, I’m ready to be surprised by everything.” Last seasons collection, which came complete with a surprise appearance from Naomi Campbell who closed the show in a massive pink gown, turned out to be Mr. Posen’s brief farewell to strictly red carpet dressing.

“Today is a big day for us, because we’re presenting a collection that is elevated daywear,” Zac said backstage. “We’re showing in flats. Most of the fabrications are in cotton and daywear fabrics. It’s all of the great techniques we’ve developed over the years, even looking into the archive of techniques and bringing that into clothing that has a sense of ease, things slightly off the body with a little more fluidity and softness. To highlight that, we’re playing with a color palette of white ivory, black, navy, and one red dress in the middle. The girls are taking them as they are. Not over stylized. I just think that as I’ve grown, and my customer has grown, I want to propose ways for her to dress off of the red carpet or the gala as well.” With that said, there would be no surprise runway cameos. “Tonight the surprise is just the sense of ease and softness,” he added.

In addition to Christina Hendricks, Zac’s front row came packed with celebs including Jennifer Hudson and Amy Schumer, marking her first NYFW appearance. Schumer showed no trace of her good humor, however, and sat stone faced and silent throughout the show and refused interviews beforehand. Meanwhile, Bella Thorne, who revealed that the designer would be tasked with creating her outfits for some upcoming milestone moments.  “I loved Zac since I was little,” she said. “I wanted him to design my wedding dress. Then I did Project Runway with him, and he was so sweet and really welcomed me into the family. So, now he’s designing my birthday dress too.”