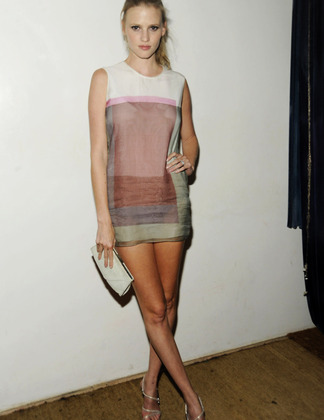 (NEW YORK) German fashion designer Wolfgang Joop seems close to closing shop on his Wunderkind line, after abruptly cancelling his Paris Fashion Week show in March and bidding a hasty adieu to most of his staff, British Vogue  reported this morning. Uncertainty about Wunderkind’s future began swirling in 2010, when Joop parted with 65 percent of his company in an attempt to cobble together some operating cash. The Wunderkind brand, which operates one London store and two German locations in Berlin and on the resort island of Sylt, has yet to break even.

Joop established the Wunderkind Art label in 1999, which debuted at New York Fashion Week in fall 2004 with punchy hues and exaggerated silhouettes for women. A menswear line was introduced five years later. The eccentric designer began his career with a fur collection in 1968, conceptualized with his ex-wife, followed by the debut RTW collection of JOOP! in the early ‘80s. Joop started rolling out off-kilter men’s togs in 1985, identifying himself (who else?) as the ultimate JOOP! consumer. He sold the bulk of his eponymous line to investors in 1998, selling the last five percent of shares in 2001.

p>Beyond the runway, Joop has written for German publications, proven his art prowess as both an avid collector and creator, and penned multiple books over the past decade including a cookbook entitled Hectic Cuisine in 2002 and a coffee table-caliber autobiography in 2009.  The outspoken designer railed on Heidi Klum’s curves in 2009, and complained that the smile-prone supermodel “always grins so stupidly” to German news site BILD.com. Fellow German fashion nonpareil Karl Lagerfeld chimed in on the Klum bashing, while Tim Gunn defended his Project Runway co-star against Joop’s “ridiculous” and “very troubling” criticism. Joop, ever the rabble-rouser, also tried to trademark the peppy punctuation on his JOOP! line in 2006. German courts rejected Joop’s request, much to the relief of grammar junkies everywhere. An official comment regarding the fate of Wunderkind has yet to be released.
ALEXANDRA ILYASHOV