What’s Up With Kate Moss and The Biebs? 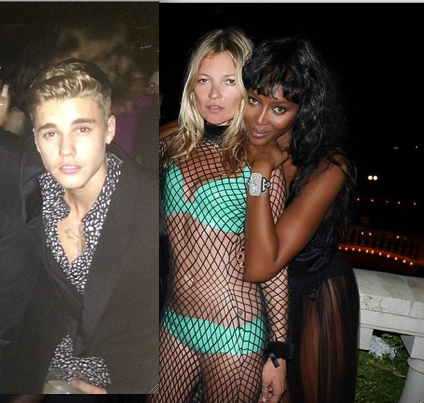 In the news we don’t particularly believe, but still appreciate on the creativity front, The Sun is reporting that Kate Moss has scolded Justin Bieber! Pray tell? Word is that Kate gave the Biebs a talking to at Riccardo Tisci’s birthday party in Ibiza over the weekend about his bad boy behavior. “Kate had a huge go at him and told him he needed to behave,” sources tell The Sun. “She was giving Bieber some choice words like a teacher after the singer asked to be introduced.” Riiiiiiiiiight. “He’d gone up to say hi to [Kate] like his usual cocky self, expecting her to gush over him,” the source reveals. “It was quite a slap in the face.” The pop tart was in the news last week when world hero Orlando Bloom tried to punch him at Cipriani when he made a comment about the actor’s former wife, Miranda Kerr, that didn’t go down well. There have also been recent reports that Bieber tried to get Bloom blocked from Tisci’s bday bash, but that also falls into the news we don’t particularly believe category.