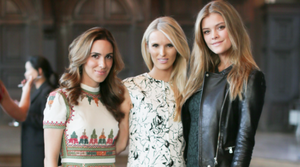 The Editorialist’s revealing cover with Nina Agdal for the debut of their first print magazine to accompany their e-commerce site caused quite a stir when it debuted in February. Agdal appeared in black and white on the cover with what is now one infamous boob. The busty blonde was giving Kate Upton a run for her money in a dress that zipped diagonally from shoulder to hip…worn, obviously, unzipped. We caught up with The Editorialist’s co-founders, Kate Davidson Hudson and Stefania Allen, at a recent dinner for their collaboration with the CFDA called Editorialist x CFDA Spotlight Accessories, where Agdal was in attendance, and the duo filled us in on the reactions to the cover.

“I was like, ‘Mom, what do you think? I’m not going to send it to grandmother,’” said Hudson. Turns out, Hudson’s mom wasn’t too offended by the shot. “She said to me, ‘I love it. She has quite an interesting body…it’s beautiful so why not show it off?’” But the cover was quite a hit on Hudson’s husband’s investment floor. “My husband works in banking and The Editorialist isn’t really in their vernacular, but he said one day on at work everyone was like, ‘Hey, check out The Editorialist! I’m not sure what it is, but the cover is amazing! Pretend it’s for your wife or whatever you need to do, but check it out.’” said Hudson. “Talk about a great cross section of people to introduce it to!” We hope those guys also bought something for their wives, non? Meanwhile, Allen’s father was thoroughly enjoying the cover. “My mom called me and she said, ‘Your dad has been googling Nina Agdal and she did something very racy!'” said Allen. “I was like, ‘Why is my father googling Nina Agdal? Isn’t this a problem?!’” Looks like there’s another curve-blessed Sports Illustrated mod about to follow in Miss Upton’s sexy footsteps.

Hudson and Allen were fairly tight-lipped on how they might top that inaugural cover with their next issue. However, they did reveal that their next cover gal isn’t in the fashion industry, is crossing over into fashion, and has quite a large Twitter following. “It’s not Rihanna, but never say never!” said Allen. Can you guess who it is?