What Do You Get When You Put A Lambert, A Jeannie, And A Cavalli Together? 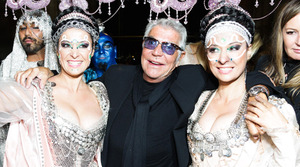 (VIENNA) By now you’ve probably heard of a little party in Austria called Life Ball that just celebrated 21 years as the largest AIDS event in Europe, with an epic rep proceeding it as one of the most sensational nights on the globe. Could it ever live up to the hype? Last weekend, editors, models, hairstylists, drag queens, club kids, a porn star, Adam Lambert, Greg Louganis, Carmen Electra, and TV legend Barbara Eden of I Dream of Jeannie fame boarded a flight a flight from JFK on Austria Air to find out. The verdict? Does it ever! We’ll let the plane ride debauchery remain in the sky and get right to the matter at hand: Life Ball!

This year’s ball devoted itself to the fantasty of 1001 Nights, with the motto “it takes the night to see the stars” as the inspiration. On Saturday night outside of Vienna’s stunning City Hall, 1,500 people from around the world came to party like it was Aladdin’s last day on earth. Where else would Bill Clinton mingle with Amanda Lepore (who we spotted on our travels back home, working her look at customs!) or a pregnant Fergie judge a Vogue-ing ball while the masses munch on wiener schnitzel? Lest we forget the random and unexpected sightings of Melanie Griffith, Kelly Osbourne and Dsquared2 designers Dean and Dan Caten to the mix while iconic New York nightlife legends Joey Arias, Susanne Bartsch, and Sammy Jo looked downright tame compared to some of the looks that out-glittered them. Less (clothes) was more.

The tale of Scheherazade provided the ball with allegories around the topics of love, wealth and solidarity, and set the stage for appearances by Hilary Swank, Franca Sozzani, Sir Elton John, and Clinton, who confessed how thrilled he was to finally have his wish granted and meet Eden. (We told you this was random!) Lambert performed with a troupe of 40 shirtless dancing thieves, Azealia Banks sang her smash 212, and Karolina Kurkova headlined a Roberto Cavalli fashion show featuring an unprecedented anthology of Cavalli looks inspired by the theme of the night. Sound exhausting? We were just getting started. The rest of the evening was spent inside of City Hall’s Grand Festive Hall for the after hours at the Volkgarten and dancing till the wee hours of the morning.

With all the visual splendor and memorable moments, the belle of the ball is the $2.5 million raised for AIDS research thanks to the city of Vienna coming together for this massive event. We’ll be back to your ball any day, Vienna. Enough about us. Check out our Gallery to peruse all the looks of Life Ball 2013. Your future Halloween costume awaits you.
EDDIE ROCHE