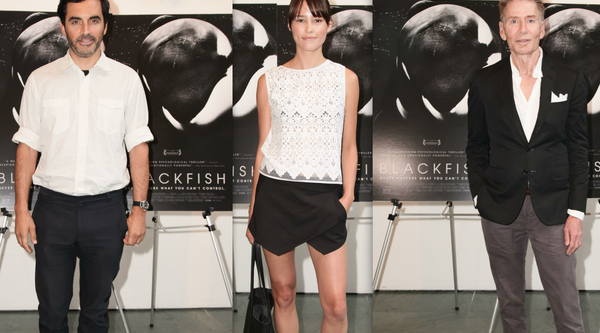 (NEW YORK) Last night, CNN Films and Magnolia Pictures hosted a screening of Blackfish, which had a chic set piling into the MoMA Celeste Bartos Theater for the occasion. The evening kicked off with a tapis rouge showing that included Calvin Klein,  Yigal Azrouel, Grey Gardens director Albert Maysles, and models aplenty, including Anne Marie Van Dijk and Leslie O’Kelley (the latter is a DvF-adored strutter). The film highlighted the corruption of SeaWorld’s Orca whale facilities; as the credits rolled, the audience remained in a state of shock that translated to a silent theater. Not the typical post-screening vibe…Only after everyone was able to swallow the knots in their throats did the applause start, topping the night off as a “very humbling experience” for filmmaker Gabriela Cowperthwaite.

Following the movie, the cast and guests headed to Circo NYC to reflect on the documentary and its message while clinking drinks with orca whale trainers. Also on the after party to do list: enjoying delectable food, including a classic chicken dish and ricotta-filled ravioli, plus at least half a dozen desserts (nothing from the spread being from the sea, of course!). The event marks not only the premiere of an emotionally stimulating movie on animal captivity, but also the start of a campaign against such improper treatment of animals of the Orca whale variety and beyond.
MADELINE CHAMBERS

Joe Zee's Next Project: Fashion Camp For The Hamptons Crowd