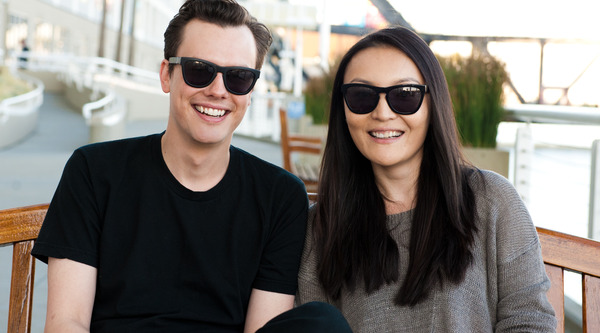 You have a very eclectic background with stints at WWD, Goldman Sachs, and NASA. Random!
[laughs] Career schizophrenia, I guess.

How’s the fashion on the NASA campus?
I was in the Singularity program. If you’re an astronaut, you’re the only person that’s allowed to wear “Nassau blue” which is a specific pentode shade or royal blue. They take it very seriously. It’s basically a blue jumpsuit. When they wear it around the campus, everyone is so impressed and ‘ohs and ahs”. They’ve actually pioneered a lot of fabrics that we all take for granted. Did you know Velcro was pioneered for NASA? It’s more related to fashion than you might think!

Why sunglasses?
I never anticipated this as something I wanted to do, but I was always really interested in how sustainability and social issues could be integrated with fashion in a way that was more authentic and genuine. Many people I know who work in fashion are extremely intelligent and very up-to-speed with current events. But it seems that so much of the designs and inspiration sort of exist in a vacuum from all of that. Therefore, I spend a lot of time brainstorming how to create a consumer good that felt more authentic and genuine in relation to social issues. I decided that one way you could do that is to use raw materials on a product that would give honor to the cause. Since you can’t just put a piece of cement on a blouse, I felt like sunglasses were the perfect vehicle where you could create a unisex, universal flattering object that can appeal to everyone and embellish it with something that made it feel more meaningful.

Is there a “Sunglasses for Dummies” book to learn about the industry?
I wish! It took forever. We learned just by doing. We figured out how to cut the grooves in the side the sunglasses through Google and working with different crafts people locally. About a month and a half after we launched, and thank god it was with only our friends and family, all of the pieces fell out. I had the 3M technical support line memorized, and I learned more about adhesives then I ever thought was possible. We researched every single type of glue that’s out there and had to come up with a completely new process for attaching the pieces to the side. We wouldn’t have been able to do it without the internet.

What percentage of this is going to charity?
Ten dollars from each sale goes to charity. And each charity is authentically aligned with the name and the story and material. Our bestselling model right now is called Children of California and it’s for Californian Redwood, which has been reclaimed to different places in the state. Then the charitable component is Teach for American in California. Another example is our model Louisiana Purchase and the charity is a New Orleans jazz foundation.

Are you selling in stores or just the internet?
We sell in stores but over 90 percent of our sales are currently online. We’re sold at Opening Ceremony and Fred Segal. Those stores have helped people respect the brand.

A lot of bloggers and editors are wearing the shades. How are they finding out about Westward Leaning?
Gifting! Our PR company helps send them out to different people who might be interested. Our sunglasses have even been worn by Justin Bieber and I thought to myself “wow, our site is going to blow up in traffic”. However, it’s nothing compared to when Susie from Style Bubble wore them. That caused a surge of interest in the brand, and frankly, a lot of sales.

Have you had to pay any of the bloggers to wear your stuff?
No, we’ve never paid anyone, but we’ve definitely given them product for free.

Who was your first red carpet client?
Emily Blunt wore a pair. I remember it was the middle of the night when she was leaving Los Angeles airport. I received the picture of her wearing them on my phone. I jumped up and down! It was really great validation for all of my friends, family, and colleagues who frankly thought I was a little bit nuts to be doing this!

Rihanna Burned Charlize Theron and It Was...

Gigi Hadid Shoots for the Moon in...

Blast Off! Chanel’s Out of this World...