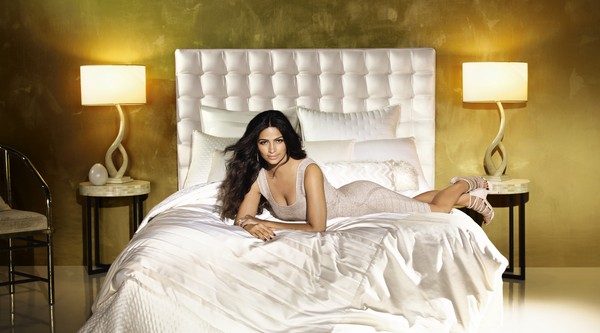 The gorgeous Camila Alves is not only the mother of Matthew McConaughey‘s children and his wife, but she’s also the brand ambassador for Macy’s popular I.N.C. line. The Brazilian-born model and designer was recently in Manhattan and called your Daily to fill us in on her tony gig. We even restrained from asking too many questions about Matthew…

In our research on you we discovered there’s another famous Camila Alves. Do people get you confused a lot?
I don’t know if people get confused, but there is another Brazilian girl who is a model. I don’t know how but some of her website pages end up with my pictures on it. So I don’t know who is doing that. [laughs] But it does happen. I actually knew her sister from back in the day.

Let’s talk Macy’s! What’s your role exactly as ‘Brand Ambassador’?
They came to me about the partnership about two seasons ago, so I went to a Macy’s store to figure out what the brand was all about. People sent me to the plus size section…and I thought to myself ‘ok, that’s a different take on how they are going to market this’, you know? I became familiar with the brand and realized that they really do have all sizes for women, which was something that made me fall in love with the brand. All of those things spoke to me. Everything that I do in my real life; personally and with my handbag designs, I always try to include every type of woman in it. The fact that we had a similar philosophy made this a no brainer for me.

What’s the I.N.C. brand?
It’s basically a head-to-toe brand. They provide jewelry, apparel, shoes; they are going to be doing handbags and are doing home which was just added to their collection. The way that they do home is basically everything they do with fashion but incorporate that into bedding.

We saw you on The View last week! How was that?
It was a very special experience because it’s a very big show. The women were amazing. Whoopi [Goldberg] came in the dressing room before the show and gave me one of the nicest hugs that I’ve had in a really long time. It was one of those hugs that energize you. Then we go on the air, and everyone was so kind and so sweet. It was an honor being there. I just wish that I didn’t have my ‘baby brain’ when I was there. You know, it’s life and my brain is not fully there yet…I started talking and didn’t finish the thought but it’s just part of it.

How’s motherhood besides the baby brain?
It’s the biggest blessing you could have, but it’s hectic. I have a four and half year old, a three year old and a two and a half month baby. One second I will be in the shower washing my hair and then the baby will cry and then I’ll get out of the shower and breastfeed with shampoo in my hair. It’s tricky, but I do my best.

How many hours of sleep are you getting?
Not much. Every night is different. Some nights, we get a good rest…some nights we don’t. You know, they are so little. Every single sound they make, you wake up to check on them and make sure it’s okay. I do have help with the baby because I am working.

What else is new?
I have a handbag line that I do with my mother, which we have been doing for about eight years now. We have an accessible line on QVC and are getting ready to do my first back-to-air show hopefully in September. We don’t have the date locked yet. We also have the foundation where we are putting together a gold tournament with concerts and a fashion show. All kinds of fun stuff!

How many times have you watched Matthew in Magic Mike?
I’ve only watched it three times. I watched the first director’s cut in a room with me, Matthew, and another friend. Then I saw it at the L.A. premiere and then the London premiere. I am very involved and am such a big part in Matthew’s work and stuff. I was there on set…and the day that he was doing the huge strip routine, I had flown in from Brazil. I went straight from the airport to the set. I was hiding in the back so that he wouldn’t know I was there. I was like ‘there’s no way I am missing this!’ When he was done, I surprised him and he cracked up. It was quite a scene.

We’re very jealous of that experience. Is he living on junk food to get his weight back up?
No, no, no. We try to be pretty good about things like that. Since he’s lost so much, he needs to gain in a healthy way.