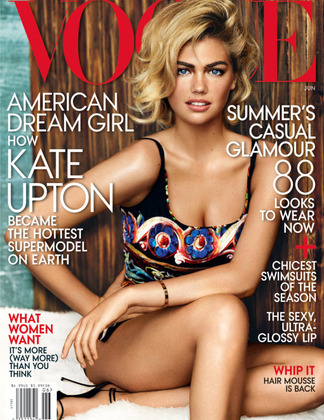 At last! Kate Upton finally lands an American Vogue cover and interview after multiple appearances inside  the mag. “America’s Dream Girl” tells them that despite tabloid talk she’s currently single and living at the Mandarin Oriental hotel with her things in storage. She’s also serious about her acting with a role in the Cameron Diaz and Leslie Mann flick, The Other Woman, (we’re going to go out on a limb and predict that she’s playing the other woman!), and a future ambition that we didn’t know about. “I would love to have my own lingerie line,” she reveals. We could see that. The new issue of Vogue hits newsstands on May 21st.

The Most Revealing Quotes From Beyoncé’s Vogue...