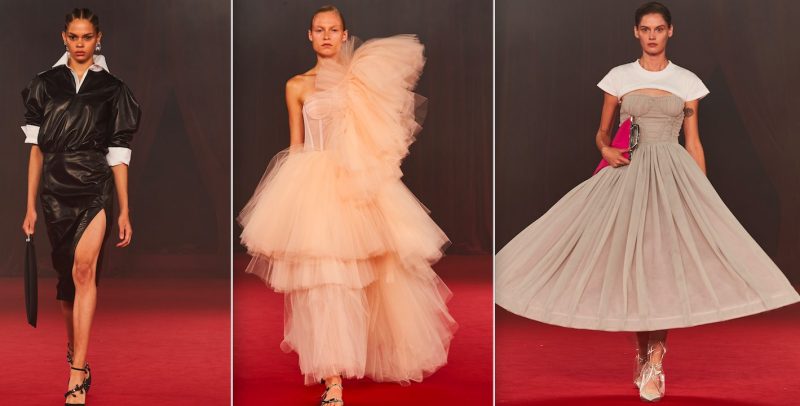 Princess Diana was Virgil Abloh’s not-so-obvious inspiration for his almost Matrix-like collection. But upon closer inspection you could see some of her signature looks in a black and white flecked print, a pink skirt suit worn with white sneakers and socks, and some particularly voluminous sleeves. Princess Di had impeccable style and it feels right to return to that particular version of the ’80s after the endless onslaught of ’90s references, and in Abloh’s hands it was, naturally, an incredibly cool take on the style that felt thoroughly modern. Abloh’s stamp was to turn the softness of her style and add some edge in leather, crop-tops, wild proportions (that hoop skirt!), and some serious sunglasses (some of which hung from croakies, another smartly timed ’80s revival). But he also literally put his stamp on the pieces with tulle ensembles revealing his logo underneath or worked into the Diana’s iconic black and white print. He also worked in street cred by bringing on artist Devon Turnbull, formerly of Nom de Guerre, to create a typeface for the back of a jacket that read “Natural Woman.” Plus, he enlisted Naomi Campbell to close the show in a pair of white biker shorts topped off with a white tailored jacket with a side of ruffles at the hip.

The collection also included some surprising collaboration including Jimmy Choo, making this the first time the shoe company has ever collaborated with an outside designer. Those included nine silhouettes including a particularly standout PVC encased version. And while it didn’t make the runway, Abloh has created a t-shirt with the Red Cross featuring the organizations logo as a reminder of Princess Di’s humanitarian work.

It was an awesome homage.