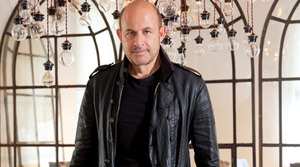 (NEW YORK) Fascinated by rock & roll history? Forget schlepping to Cleveland. Just take a meeting with John Varvatos at his Chelsea offices, where Slash’s hat and Zeppelin’s gold records live alongside his shelf of CFDAs. The biggest music junky in the biz talks us through his holdings.
BY EDDIE ROCHE

Golden Oldies “I have quite a few things from Led Zeppelin. These gold records are priceless. They were given to me by Jimmy Page and Robert Plant. I can’t even comprehend the value, but the personal value is incredible. I have the first five albums. They also gave me a signed guitar. I’m not sure what I’m going to do with them. It would be great to keep them all together when I’m gone.”

Willie’s Mug Shot: “I was on Willie Nelson’s tour bus when we were shooting our campaign. He was drinking coffee and I said, ‘That is the best cup ever!’ He gave it to me. I love it. I have a couple at home now, too. I also got some amazing stories from Willie.”

Mad Hatter: “This is a hat given to me by Slash. I’ve tried it on, but I haven’t worn it out in public yet.”

Tambourine Man: “This is from Dave Matthews. We shot our ad campaign with him and he signed it and gave it to me. He drew a little artwork on it, too. I haven’t played it yet.”

Sit Down!
“I found those two chairs at a flea market in Paris about 15 years ago. They’re made from old airplane chassis. People come in and think they’re from Restoration Hardware, which kills me.”

Sit Down! “I found these two chairs at a flea market in Paris about 15 years ago. They’re made from old airplane chassis. People come in and think they’re from Restoration Hardware, which kills me.”

#Winning: “The CFDA Awards are a reminder to always raise the bar. It’s a proud thing for the company. When I meet with the team in my office, it’s something we can all take pride in. It reminds us to never compromise and to keep pushing.”

Serious Stones: “I have a guitar is signed by all the members of the Rolling Stones.”