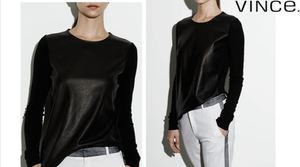 (NEW YORK) Following months of speculation that apparel conglomerate Kellwood Co. was preparing contemporary clothing brand Vince for an IPO, an official announcement has finally confirmed that the company plans to go public. Kellwood Co. purchased the brand in 2006, and is affiliated with Sun Capital Partners, Inc.; their high–end clothing subsidiary is named Apparel Holding Corp, but not for long. When the corporation filed their registration with the Securities and Exchange committee to go public, they also mentioned that they would be renamed Vince Holding Corp. For a brand with 23 stores, this IPO has the potential to raise $200 million to pay off debts and continue to expand across the U.S. No small feat of financial proportions! The decade-old label offers luxurious coed basics, and recently entered a licensing agreement with Tawil Associates to roll out a Vince childrenswear line in Fall 2014.

Jimmy Choo Rumored To Be Contemplating An...