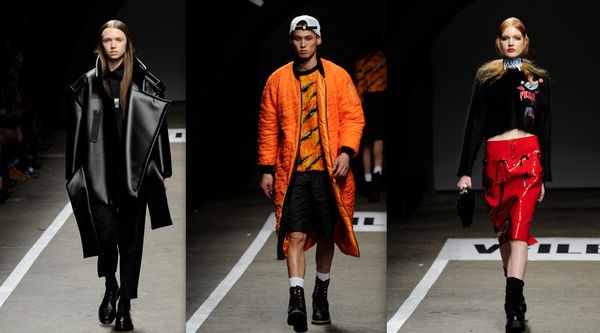 (NEW YORK) VFiles debuted the second installment of their user-generated fashion show last night with VFiles Made Fashion 2 at Eyebeam Gallery in Chelsea. The designers are chosen each season via a global search through VFiles’ digital platform. Each designer can submit videos and images of their collections and are ultimately elected by VFiles staffers, online VFiles users, and a select group of mentors. For Vfiles’ first runway show last season, four designers made their debut, but this season only three made the cut: ASSK, Melitta Baumeister, and Hyein Seo.

Only two seasons in and the VFiles Made Fashion shows has become a hot ticket during NYFW thanks to its explosive youthful energy, new ideas, and downtown cool factor. Not to mention, a look from Hyein Seo’s Mallrats and Empire Records meets Emily the Strange collection landed the coveted featured spot on Style.com’s homepage today, beating out many established designers. Seo, who’s a Royal Academy of Fine Arts Antwerp masters student, showed a collection that featured pieces like oversize white long fur stoles, chokers, and crop top mohair sweaters with the word “Fear” scrawled across. Plus, there were black creeper shoes worn with calf-high socks and cherry red latex skirts with ribbons. Parsons MFA grad and former Viktor & Rolf intern Melitta Baumeister had a fully B&W collection with giant oversized leather moto jackets, leather sweatshirt tops with 3D bananas on the chest, and an oversized white ankle-length dress that was almost like a coat for a play on proportions. Australian design duo Agatha Kowalewski and Sarah Schofield of ASSK brought the streetwear vibe with their camo-inspired sportswear. There were bright orange puffer jackets worn with baseball caps, mixed with cargo pants, shorts, and a black sweatsuit worn with a baseball cap decorated with cape-like metallic tinfoil underneath for the guys. For the girls, looks included an orange crop top paired with a matching zipped skirt, and a camo floor-length puffer worn over a matching crop top and skirt.

The energy in the room was palpable, from the runway to the benches as DJs Messkid, Thando and DJ DH blasted out remixed versions of songs like “My neck, My Back” by Khia (yeah, that one). We spotted Kanye‘s righthand man and trendsetter, Virgil Abloh, sitting front row. After the show, everyone rushed over to Westway, including guests like Cam’ron (who was hosting), Hannah Bronfman, RJ King, Scout and Tallulah Willis, Mickey Boardman, Lucien Smith, and Hanne Gaby Odiele. In other words, it was fresh to death.
PAIGE REDDINGER

A Lego Adventure For The Chic Set

Go For The Gold