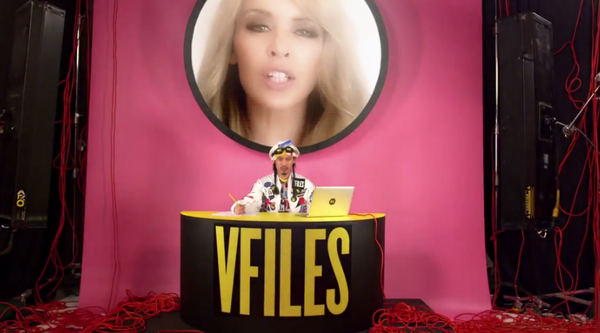 VFILES‘ Preston Chaunsumlit, the star of the hit satirical web series Model Files has garnered a cult following from industry insiders, but it seems like Chaunsumlit’s fame may be going from micro to macro. Kylie Minogue and Chandelier Creative tapped Chaunsumlit to star in her new music video “Sexercise” , where he also serves as the casting director helping the diminutive pop diva to find a guy that can “shoot the shot”. The VFILES-produced video is part of a microsite called Sexercise.tv, created by Chandelier Creative and Roc Nation. So, what exactly does the vid entail? Auditions from 6-pack laden male models in testosterone touting situations, like motorcycle riding, yoga (the dripping with sweat kind), sculpting (chiseled torsos chiseling away at stone), jump roping (in slow mo), and hairy, dancing cowboys (in cut-out denim chaps with thongs). “I was overwhelmed by hair,” said Chaunsumlit in regards to the cowboys in the latest episode of Model Files. “I felt like Goldilocks and the seven bears.” As always, Chaunsumlit behind-the-scenes persona emerges as the star. But did he shoot the shot? Watch the video and find out!

LeBron James and Nike Team Up for...

Getting to Know Christen Mooney of Hood...