Versailles '73: Inside The Documentary On Fashion's Biggest Battle 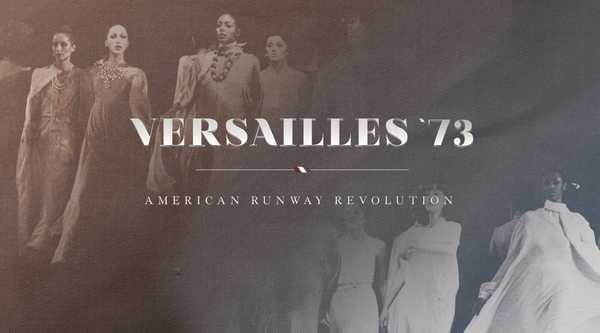 (NEW YORK) Designer showdowns, catfights and models that changed the face of fashion are just a taste of the grande drame in Deborah Draper Riley’s new doc, Versailles ’73: American Runway Revolution. In the words of those who lived it, from Pat Cleveland and China Machado to Stephen Burrows, Riley gives us the dish on what went down when America’s design greats faced-off against the haute-y French in a charity event that turned into what John Fairchild would coin “The Battle of Versailles.” The Daily sat down with Riley for all the juicy vintage fashion scoop…
BY PAIGE REDDINGER

How did this documentary come about?
I was actually researching another documentary, about Donyale Luna, a supermodel was discovered by Richard Avedon, dated a Rolling Stone, and then died of a  drug overdose in Rome in the ’70s. I came across the story [of the Versailles show] on NPR. I started researching it, because I was stunned I’d never heard of this event. Some of the most iconic faces were in the place that night it happened. By the time you look at an event that has Andy Warhol, Princess Grace, Josephine Baker, Halston, Stephen Burrows, YSL, it’s pretty special.

As a VP at BBDO is the branding aspect something that drew you to the story?
Yes! Eleanor Lambert was an incredible fashion publicist; she really understood the power of marketing, and of creating an event delivered as a fundraiser, but she knew that puttingAmerican designers on French territory would draw a lot of press. It basically catapulted the careers of her clients. If you’re a business person, a branding person, or remotely connected to fashion, you kind of get that whole David and Goliath story. You root for the people sent to Paris, going through all this drama, to get a show off the ground.

Any fun moments you weren’t able to include?
Pat Cleveland had her daughter Anna there at the interview with her and the two of them catwalked for us. We were just in awe; she gave us all lessons!

Was anyone reluctant to reminisce?
No one was difficult; everyone was super excited to tell the story. I think they’d been waiting 40 years to tell it! For both the American and French people involved, it was life changing, and certainly trajectory changing, in terms of career. In terms of fun? Man, you cannot beat Pat Cleveland for fun. Simone Levitt was hilarious and fun and she kept offering us drinks. She was like, “Do you need a vodka?”

Would Simone make a good Real Housewives character?
Oh, those girls have nothing on her. She’s the ultimate. She’s a great hostess. She has the perfect things in her house for parties. She’s been all over the world, and she has this personal yacht that her husband gave her: Very few women in life have their own 250-foot yacht. She’s an old-school diva.

Will you screen the documentary at Versailles?
They have a date on hold for me, but I don’t know if I’ll be able to get a sponsor to get all of the girls over there and have it screened. It would be a wonderful way to celebrate the 40th anniversary, though, and give the money to the chateau.

You interviewed Dennis Christopher, who was recently in Django Unchained. How’d he go from being Halston’s assistant to an actor?
He stumbled into being Halston’s assistant! He was actually an actor from the beginning, but when you’re a young actor you have to get a job, too. Dennis got a job in Halston’s mailroom and then became friends with Stephen Sprouse. The two were then promoted tp Halston’s assistants. Before flying to France for the [Versailles ’73] show, Halston told his assistants, “I need you two kids to pack up all of my stuff, get it ready to go on the plane, and get yourselves sorted out with a passport. You’re going to need to press the clothes, get them on the girls, and get their asses on the runway!”

If the epic Versailles runway faceoff took place today, who would you cast?
Maybe Tracy Reese could be Stephen Burrows; Nanette Lepore or Tory Burch could be Anne Klein; Jason Wu could be Halston. And I’d put Oscar de la Renta as himself. He’s still relevant! On the French side, I wouldn’t include Cardin or Ungaro, but I’d keep YSL and Givenchy. I’d also throw in Lanvin, Balmain and Balenciaga.

There were many dramatic, catty moments! Has this industry ‘tude changed?
Yes, but I think a lot of that was because a month before the show Halston was bought by Norton Simon for $16 million. That really shifted the balance of power between designers. All of the sudden, he was a young man with $16 million in his pocket. Can you imagine what his ego was doing? It’s gone bananas.

Who were the hardest people to get an interview with?
We missed Oscar [de la Renta]. We were at his office and he had an emergency, but because I was in Atlanta I was unable to reschedule. We couldn’t work out our schedules with Donna Karan, who was Anne Klein’s assistant at the time, either. We didn’t have an opportunity with Liza Minelli, who performed, either. Of course, I couldn’t speak with Yves Saint Laurent, but I would’ve liked to speak with Pierre Berge.

How did you find old footage of the show?
When I talked to Harold Koda, he said that they were unable to find it at The Costume Insitute at The Met. But Stephen Burrows told me he remembered a camera being there, but I didn’t find that footage until month eight!

How did you find it?
I wrote to Vanderbilt University, because they have old TV footage, asking if they had anything on Versailles. They said they didn’t, but I pressed on to look by date; turns out, Walter Kronkite had covered a story on a gala in Paris. I just knew that could be it; turns out, it was!

Do you think American fashion will ever “surpass” French fashion again?
I think we may perceive it like that, but French houses realize that Americans have the talent to run [European] houses; the likes of Marc Jacobs and Tom Ford. They reach to America for a lot of leadership in terms of creative personalities that they use to resurrect their houses.

The CFDA Asks for Support for Planned...