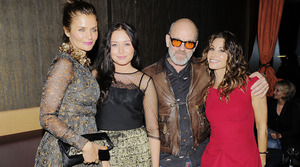 (NEW YORK) For the fashion set who couldn’t wait another day to check out Lifetime’s House of Versace, The Cinema Society came to the rescue last night. The Museum of Modern Art was home to the unveiling of the most eagerly anticipated television movie since…Martha Inc. You’ve probably heard by now that Gina Gershon portrays Donatella Versace’s bumpy (no pun intended) life in the biopic based on Deborah Ball’s book House of Versace: The Untold Story of Genius, Murder, and Survival.

“I’ve never met her,” Gershon revealed before the screening started. “This is our version of the story. Who knows what they’ll think of it. I hope [Donatella] doesn’t hate me. She seems like a lot of fun.” The fashion house has publicly denounced the film as fiction, but most will likely walk away from it as a salute to the brand and Donatella’s rise/fall/rise.

So, how was it? In what could easily have been a parody of Donatella, Gershon manages to give her depth with a flawless physical transformation. (The voice alone deserves an Emmy nom!) Should you expect moments of pure camp? Indeed! Are there one-liners you’ll be reciting on Monday? “Did I stutter?” Would we recommend Donatella seeing it? She should probably stick to seeing Cloudy With a Chance of Meatballs 2 this weekend, but that shouldn’t stop you. You can enter the House tomorrow night on Lifetime.
EDDIE ROCHE