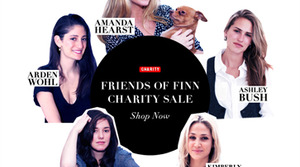 Furry fans, rejoice! Innovative e-comm and editorial site Vaunte has partnered with Friends of Finn. When we last chatted with founders Christian Leone and Leah Park, the two had left Gilt to launch Vaunte. Since November, they’ve explored the most coveted closets of top fashion insiders and tastemakers but what’s next? According to Park, they are going to launch the premium service in the next two months. A few months since the site’s debut,  the duo is making moves on the charity front: partnering with Amanda Hearst‘s charity, Friends of Finn, which works to wipe out puppy mills. Friends of Finn supporters Arden Wohl, Ashley Bush, Kimberly Ovitz, and Kick Kennedy are also selling an item apiece from their closets with proceeds going to the org. “They are really cute, young ‘It’ girls that are trying to make it more chic to be involved in charity and make it more accessible. You don’t have to spend $100,000 to The Met Gala to have an influence. It doesn’t have to be a scary thing. It’s also cool! We want to celebrate women and what they love,” according to Leone and Park. Now, as VIP Daily readers, it’s your turn to shop these coveted closets. P.S. Upcoming do-gooder collabs on Vaunte’s docket include Race to Erase MS and UNICEF.

Look Of The Daily: Linda Fargo In...