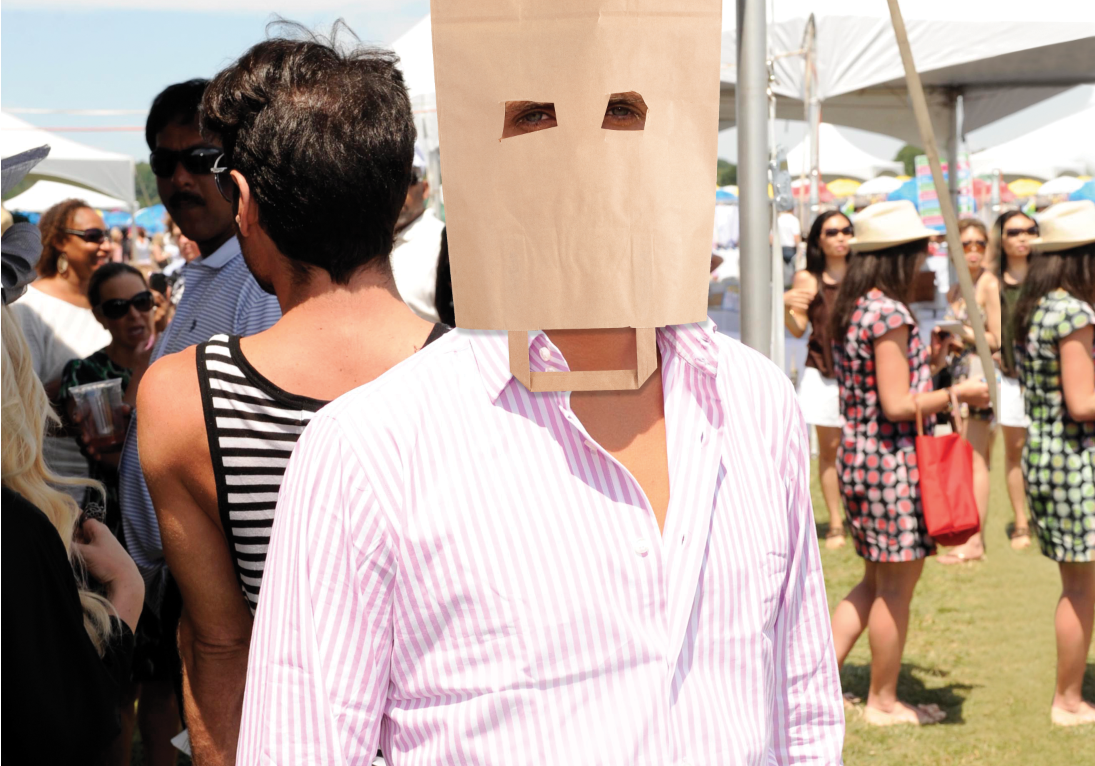 We’ve all met our share of rich kids, but this Gucci-loafered goofball belongs in the Hamptons Hall of Shame. Here, he recounts a few of his wildest nights wreaking havoc on the East End. Anonymously, of course!
BY EDDIE ROCHE

Let’s get right to it. Craziest night in the Hamptons?
Okay, once we were staying at my friend’s house, which is so big you can’t even see to the end of the property. My friend’s mom makes this famous ice tea and we decided to mix it with cases of vodka. Three days later, we were out of our minds.

Three days later?
We never stopped drinking. One night we were dancing on the furniture and this other guy and I fell through the glass of the pool-house door. We got destroyed. We didn’t know what to do, so we grabbed a car and booked it to the [Redacted] hospital, where I wouldn’t even send my housekeeper.

Go on…
So we got to the hospital and asked them to help us. There was a bunch of us in the group, including some from big-name families in Europe. My friend who also got hurt is one of the best-looking people I know, and we thought our faces were going to be f***ed up because there was so much blood. Thank God I only had some scratches. Anyway, it turned out he was really messed up and had to have major stitches. The nurses wouldn’t let us go see him in the ER, so we were killing time in the waiting room and thought we’d have some fun. We were still all kind of wasted.

What did you do for fun at a hospital?
One guy put on a girl’s high heels, and we were all trying on each other’s clothes. It was crazy. The hospital wasn’t very busy, so we went to a supply room and took those hammers that they knock on your knee and some of the guys stole gowns and put them on. We started playing doctor. Next thing we know about six security guards came to escort us out.

You don’t say!
Well, we couldn’t just leave the poor guy inside, but the only person who was allowed in was a significant other or relative. I said I was the significant other, but they didn’t believe me. I decided to call someone who could either shut this place down or open it. It was, like, 6 in the morning and a very important person who was staying at the house picked up the phone. I told him I needed some help and got yelled at on the phone by him. “[Redacted], do you know what f***ing time it is?” I told him I wouldn’t wake them up if it wasn’t an emergency. Five minutes later, the hospital security came out and said we could come in again, but we were told we had to behave this time. We were there for hours, but we were doing runs back to the house to clean up the blood and the glass. We even convinced the car wash to open early to get rid of the blood in the car. That was a night.

It sounds like something out of Risky Business.
I wouldn’t know. I’ve never seen it. Anyway, I felt so bad for the guy who got hurt. I sent him a huge box of Tate’s Cookies.

Okay! Were drugs involved?
Nope. I don’t do that. Just booze.

You’re a man about town. Thoughts on the word “socialite”?
You know what the word defines. You think fun, good-looking, social, party people. It’s still kind of silly. I’ve been in a bunch of cities and I’ve had people say they were the socialite of San Francisco or Tulsa, Oklahoma. I look at them and say, “Very nice to meet you, but you have to go away.” It’s always cheesy girls with bad boob jobs. I don’t think that’s what a socialite is. I also think there’s more to it than the party aspect. They feel a social responsibility and they have to justify the exciting life they’ve been given. How much do they do for the charities? I don’t know, but they act like it’s a chore. I have to go to this. I have to go to that. Really? I’m going for the open bar and the pretty people.

Do you ever hang out with non-rich kids?
Sure, why not? Some people come out here and play rich. They need to make every moment count, so they won’t waste time making friends with the cater waiter. They want to meet people who will invite them to the right parties. The people who actually have the money want things to be a mix to keep things interesting. The issue isn’t about the truly wealthy people not wanting to hang out with people who aren’t, it’s the people who wish they were wealthy who only want to hang with rich people.

You’ve got cash. Do you ever feel envious of people richer than you?
I’ve never been envious of anybody. At times I’m offended with how people spend their money. Be grateful, have fun, throw it around and do whatever it is you want to do with it, but have some taste. Some people have such great taste and other people buy the tackiest things you’ve ever seen. The fun people are the ones I want to know.

What are they wasting their money on?
Some people acquire things out of habit. I see people get taken advantage of. I was on a well-known yacht recently at a dinner party and this lady I was talking to is one of the wealthiest ladies in the world. She told me she was hanging with [redacted], the artist, and she said she felt she should buy one of his pieces. I told her that she shouldn’t just buy a piece because she feels bad. I convinced her to commission something instead of just buying something because she can. Don’t just give it away.

That’s good advice.
If you can do more than others, make sure you are getting something back.

What other shenanigans have you gotten into?
There was this major media family I was staying with, and it was kind of fun but a little boring because the parents were there. We went out and I got bored because it wasn’t the most all-night rager night. I hate going to bed before sunrise. I couldn’t find my way to the house, so I called a friend and told him I was going to crash at his place. I drove there and I ended up driving over a log and parking in the sand. I went to sleep and the next morning my friend told me that there was a little bit of a problem. My car was stuck. We had to have a crane take it out and then a truck came to take it back to wherever it came from. I don’t even remember doing it. Once I saw it, though, I thought it looked like something I would do.

Is there a hierarchy in your social circle?
There’s people out here who don’t like the bankers. I certainly don’t. They’d rather hang out with the people who bus in from wherever, or who work at the bars, than the bankers. They’re cheesing it up with their above-ground Jacuzzis.

What’s the problem with the bankers?
They create a lot of traffic. They’re a lot of noise. They wear shiny shirts and pants that are too tight. They bring around hookers like it’s all right. Leave the hookers at home.

As in leave them in Manhattan?
A trunk! Manhattan! Who cares? Just don’t parade them around. The real Hamptonites miss that conservative vibe. That’s why I like Montauk. It’s still shacky and fun. It’s still Ralph Lauren fancy. Not Roberto Cavalli fancy.

Tell us more about you! Is it hard or easy to meet girls if you’re wealthy?
They bring them in by the busload, but it’s hard to meet a quality girl. When you have a lot of money, you can’t expect to hold out for the same kind of person. That’s kind of annoying. Why do you want to date yourself? Find someone who turns you on and is willing to dedicate themselves to you with what they have. People use money as a guard to filter out the masses, but that’s not what it’s really about. There’s no issue getting laid, though, if that’s what you’re asking.

Are you kind to your staff?
Very! It’s so tacky and awful to see people mistreat their staff. The staff are part of your family. I’ll be at a restaurant with my driver eating sea bass and people think I’m spoiling him, but why wouldn’t I? He takes care of me. He’s gonna grow old with me. If I see people who aren’t nice to their staff, they aren’t the kind of people I want to know.

What car would you never be seen in?
Anybody who gets in a limousine should be shot. They’re so flashy. “Look at me!” Who cares? And there’s neon inside of them. You’re entitled to drive what you want, but they take up so much space and stop traffic to make a U-turn. It’s just awful. It’s like, why are you even here?

Would you define yourself as a party boy?
I really don’t mind that title. I know people half my age who can’t keep up with me. I’d rather be known as that than as a banker!