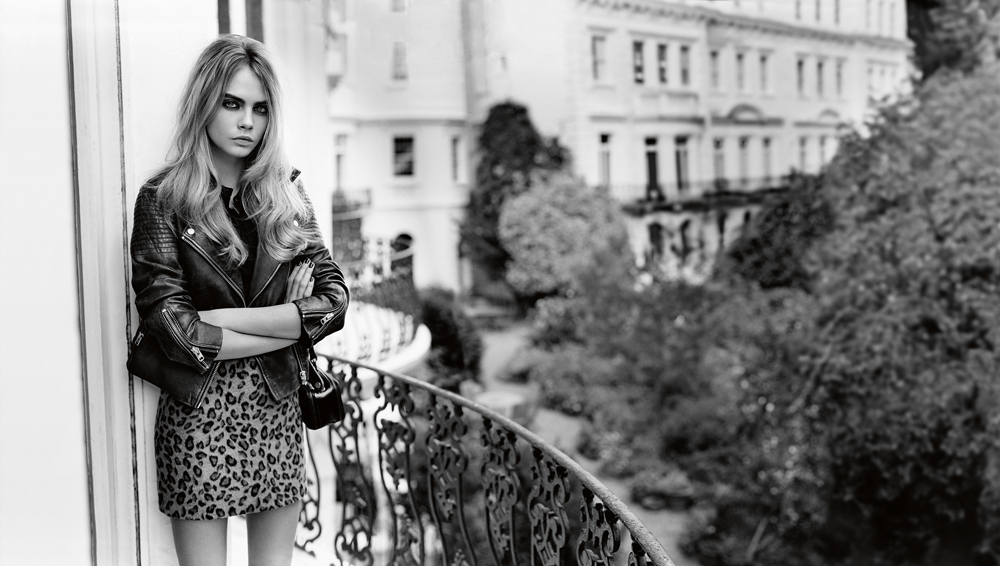 In case you’ve missed it, Cara Delevingne truly is becoming the Kate Moss of her generation. Everybody loves a beautiful rebel, non? So it’s only natural that Delevingne will follow in Moss’ footsteps as the face of British fast fashion retailer Topshop for their Fall 2014 ad campaign. It’s not her first time posing for Topshop: the top mod’s first appearance for the brand was back in 2010 when she was featured in the Kate Moss Topshop campaign video. She also walked for Topshop Unique runway shows for three seasons in a row including Spring/Summer 2013, Autumn/Winter 2013, and Spring/Summer 2014. During the Autumn/Winter 2013 campaign, Delevingne’s backstage antics doing the “Harlem Shake” went viral on YouTube with over 1.6 million views. Her other Topshop claim to fame? She was the first mod to live-stream a runway show with a “Google-cam” concealed in a handbag down the runway during London Fashion Week for Topshop Unique.

Now that the world can’t quit following her every move, Topshop brought her back this Fall to be shot by Alasdair McLellan in a series of 12 images. Delevingne is featured lounging around an apartment with a guitar, lying seductively on a yellow floral couch, and peering out over a balcony in a sexy leather jacket and leopard mini dress number, styled by Kate Phelan. “Cara is a true TOPSHOP girl. Her style is confident and playful and she can be sophisticated and chic as easily as she can be cool and casual,” said Phelan in a press statement. “Putting her spin on everything she makes the TOPSHOP collection her own. Her uninhibited natural energy is intoxicating, she is free spirited and fun.”

Plus, don’t forget to check out the behind-the-scenes video of Delevingne, in which her famous new furry friend Cecil makes an appearance! The video, by producer Leigh Johnson, reveals where Delevingne first met her pet rabbit. And if you liked her “Harlem Shake”, you will have to check her out doing “The Worm”. Not to mention her moves with a Star Wars light saber.

To top it off, the campaign coincides with an expansion plan for both Topshop and Topman. Expect five new stores to roll out in the U.S., including a new flagship on 5th Avenue. The latter will be the second largest Topshop store in the world, next to the brand’s Oxford Circus store in London. A store in Amsterdam, two more stores in Hong Kong, and first-ever locations in Egypt, New Zealand, and Panama are in the plans. “I believe that these plans demonstrate our commitment both in the UK and globally for the TOPSHOP and TOPMAN brands, with one of our biggest years of expansion to date,” said owner Sir Philip Green. “At such an ambitious and exciting time for our many thousands of staff and loyal customers, it is fitting to have a fabulous, young British star such as Cara at the epicentre of our campaign.” We must agree.