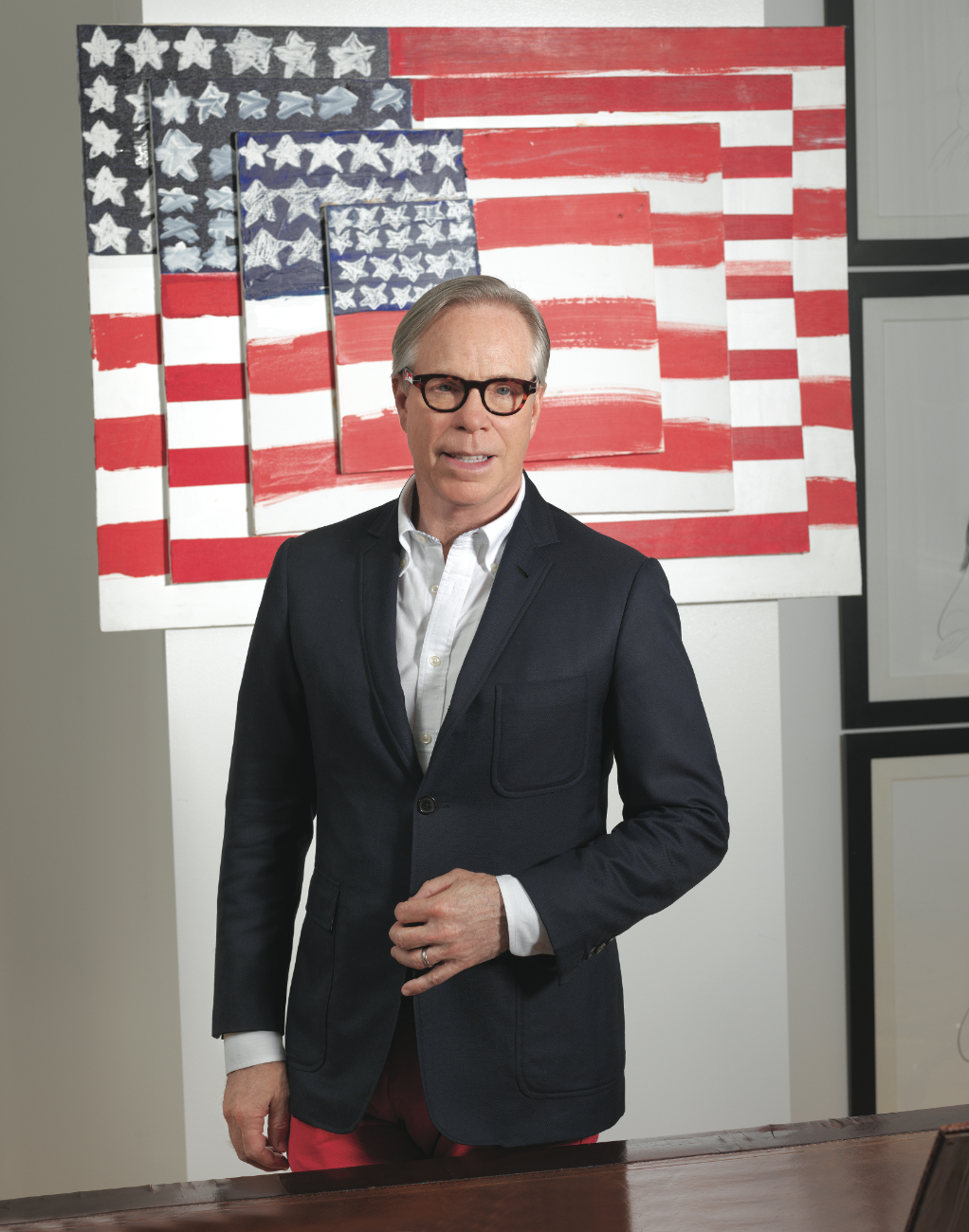 Who better to celebrate Independence Day with than Tommy Hilfiger? The star-spangled super-designer talks mega-yachts, pop art, and the importance of staying cool.
BY EDDIE ROCHE

How did you become so synonymous with the stars and stripes?
It was organic. I’m an American designer who loves Americana, whether it’s the Grand Canyon, Cape Cod, New England, Miami, or L.A. I love American film, American music, American landscapes, all of it. This country has so much richness.

Would you ever think about running for president?
Not in a million years!

You’d be good! Maybe as veep?
I’ll gladly leave that to someone else.

What pops into your mind when you think of the Fourth of July?
Family. Obviously, my color scheme—red, white, and blue. I also think of picnics, cookouts, clambakes, and old-fashioned parades. Norman Rockwell images also come to mind. Anything nautical-—boating, yachting, sailing—connects back to the red-white-and-blue sensibility I have in my bones, so to speak.

How did you celebrate during your youth?
I have eight brothers and sisters and multiple cousins, so we would all get together and do a barbecue, play badminton, fish, and play all sorts of games.

What are your summer plans?
We’re going to Europe for most of July. We’ll be on a yacht in the South of France and the Mediterranean—Sardinia, Corsica, Portofino, and Capri.

Are you able to fully unplug from work?
I set aside parts of each day to disconnect. I may not be able to answer every single email right away, but I try.

What’s an average day like on your yacht?
We’re in and out of ports a lot. We go to lunch, and maybe dinner, and go shopping and get some exercise, whether it’s running in the village or using the treadmill on the boat. If the weather’s not so good, maybe we watch a movie. Otherwise, we go jet skiing, snorkeling, and swimming. Eating is definitely a favorite pastime.

You live in Greenwich, Connecticut now. What do you love about the area?
It’s very close to New York. You know, they call it “Greenwich,” but it’s really “Green-wich,” because it’s very green. I live in the backcountry. The rolling hills are beautiful. The ambience of being on the water but in the hills is pretty great. It’s almost idyllic-—like a fairy tale.

Tell us about this American flag-inspired artwork.
It was made by my daughter, Ally. Twenty years ago, we went to the MoMA and looked at Jasper Johns’ work, and I told her one of my favorite paintings was his American flag, in either red, white, and blue, or white on white. She presented this to me 15 years ago as one of her important art projects. I’ve had it with me, either at home or in my private office, ever since.

What are your most prized possessions?
Outside of my children? Probably some of my artwork, like a Basquiat, a Haring, or a Warhol. I’m really a pop-culture addict—I love pop art, music, and old Hollywood—but I’m probably more a fan of art than anything else. Years back, I was connected to music in a bigger way, but I think art has taken over.

Did you know Andy Warhol?
I did! I went to the Factory, and he personally took me through and showed me all the different things he was working on. I didn’t realize the importance of his work back then, but I knew it was very cool. I love the fact that he put fashion, art, music, and entertainment into a blender. He was the first pop-culture icon to put his arms around all that. He was quite genius.

How would you describe him?
Aloof, but very aware of what was going on. If he liked you, he really liked you. If he didn’t, you weren’t even in his scope.

Did he like you?
You could say we were friendly. He was always very open with me. At any given time, there was so much activity. It was so exciting. I love the fact that he collaborated with Basquiat. I have a couple of those pieces. For me, two American iconic artists painting on the same canvas sort of said it all.

When did you first come to the Hamptons?
In the early ’70s. I love the Hamptons. Everything is lighter and brighter, and you really feel like you’re on vacation. The sand is white. The ambience is very American—quite countrified on one hand, and chic on the other. I sold my house in East Hampton because we were spending more time in Europe and in Connecticut, but it’s a special place.

If you were to visit the East End this weekend…
I would probably be on the beach in Southampton. I would want to play tennis, go biking, eat at Sant Ambroeus, get together with friends, and take a ride to East Hampton to see what’s going on, or visit friends in Montauk. I need a long weekend!

What are your weekend rituals?
I play tennis and go biking or antiquing. I spend time with the family, and we might go out to dinner.

What time do you wake up on a Saturday morning?
Seven. I’m an early riser.

What time do you go to bed?
I’ll put it this way: I turn on Saturday Night Live and watch the first skit, but I can’t stay awake for the entire show. I exude a lot of energy in the daytime.

What was your inspiration for the summer collection?
It’s about an aspirational lifestyle. Wouldn’t you love to be a surfer in Southern California and hang out on the beach every day? As a young person, or as a teen or in your twenties, that surfer lifestyle is so cool because it’s so chill and relaxed, yet you’re doing an activity that has a whole community and lifestyle around it. That was the first time in quite a while when we made a conscious decision to be younger with our looks.

What inspired that decision?
After over 25 years in the business, a lot of the customers grow up with you, but we want to continue to capture the youth. The youth allow you to continue to make it cool. I never want to lose that cool factor. We love the youthquake.