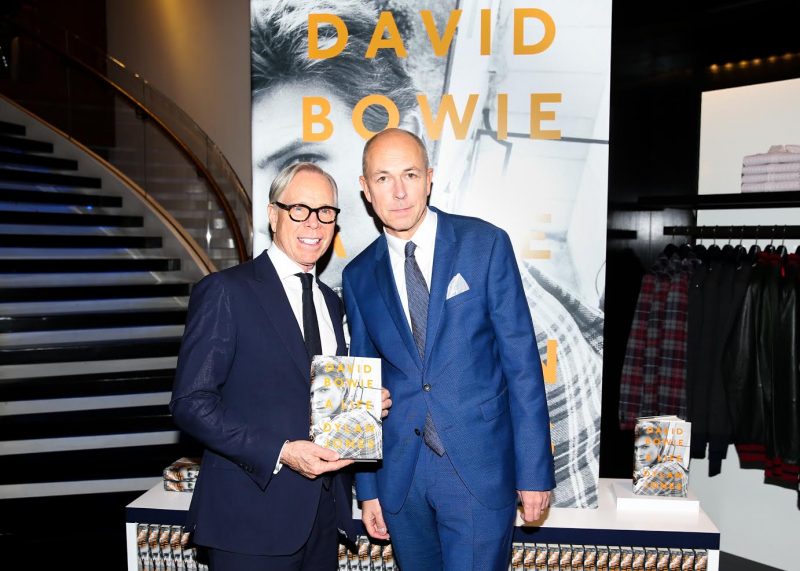 Last night, Tommy Hilfiger hosted a bash for British GQ editor and pal Dylan Jones, who kicked off the launch of his new book on a subject that is very close to home for the designer: music. The book, titled David Bowie: A Life, centers on a history of pop’s greatest chameleon, drawn from hundreds of interviews with friends, rivals, lovers, and collaborators. Hilfiger, who’s been a friend of Iman and David Bowie for years, having also starred in his H by Tommy Hilfiger campaign, has looked at Bowie as a source of inspiration for a long time. “I’m a big David Bowie fan. Dylan and I were sharing stories about David, who was also a friend of mine. When Dylan started writing the book, he wanted to interview me. We were supposed to spend like 15 to 20 minutes together, but we ended up spending a few hours together!” Hilfiger told us at the shindig. The designer has yet to read the tome, but he’s ready to get on it. As for his favorite Bowie tunes? “‘Spiders from Mars’ and ‘Young American.'”

Guests who attended the launch party at Hilfiger’s Fifth Avenue flagship included Victor Cruz, Brendan Fallis (who played tunes for the night), Bob Gruen, Cory Kennedy, Mia Moretti, Dee Hilfiger, and Neels Visser. Jones thanked Hilfiger on Instagram with a post earlier today, writing, “Thanks to @thomasjhilfiger for the tremendous launch of #davidbowiealife and to all who came and supported, including @mrshilfiger @jimmooregq and @gavinbondphotography.”