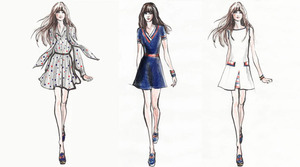 (NEW YORK) Need another pair-up to look forward to this spring? Zooey Deschanel will be partnering with Tommy Hilfiger to design a capsule collection of cheeky yet chic looks, the bulk of which will be comprised of dresses. The collection—entitled To Tommy, From Zooey—is a little bit Mod circa the Sixties and slightly nautical in vibe, combining to create a “Modical” feel, according to Deschanel. As for the pair’s previous pair-ups, the designer dressed Deschanel for last year’s Met Ball, outfitting her in a seersucker frock. The two initially met years ago at a mutual friend’s abode in Santa Monica. They’ve been working together for the past year or so on the spate of frocks, which are detailed with pleats, brief hems, and shirtdresses, done in silk, linen, piqué and oxford cloth. The actress will be featured in the brand’s upcoming ad campaign, in the completely red, white, and blue collection, as captured by photog Carter Smith. Prices will range from $98 to $199. Expect 14 of the 16 pieces in the collection to hit 200 Macy’s locations stateside on April 14th; the rest will roll out at Hilfiger stores and online on April 21st worldwide.