Tom Ford Can Talk As Much As He Wants 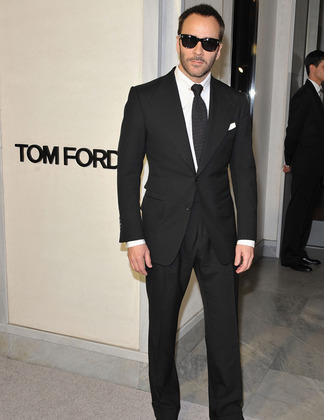 You can always count on Tom Ford for some juicy and dishy quotes when he sits down with a journalist. WWD‘s Bridget Foley caught up with Tom to talk about his recent Fall 2013 collection, how he feels about Virginie Mouzat, and what he thought of François-Henri Pinault‘s recent words about him. Here are a few choice soundbites from their conversation. Goes without saying, but we heart you, Mr. Ford.

“There is that customer that pretty much just shops at our level for collectable, amazing pieces. They don’t want ordinary, and in fact, ordinary doesn’t sell for me. For example, the more expensive fragrances are the bestsellers.”

“One blogger wrote it was like Escada on acid, which actually I think is kind of a compliment, because Escada used to match everything.”—Ford on his recent collection.

“A lot of the things I did—it’s not going to sound anything but egotistical—if I’m lucky and I did the right thing, they will be at Zara way before I can get them in the store and I don’t like that.” —Ford on why he wants his collections to be private.

“To be quite honest, Virginie is to blame for that review. I wasn’t showing that collection on the runway and it was never meant for the runway. It was a showroom collection designed for the showroom. Virginie called our offices and asked to see it, and we weren’t showing it. She used several four-letter words to our p.r. department and got quite hysterical. We then all got a little panicked because she was so vehement and I thought, “God, maybe we do need to have a little runway show—people are starting to get a little angry.” So we did a small runway show. It was horrible. That was one of the worst collections I’ve ever designed in my life.” —Ford on Virginie Mouzat‘s scathing review of his collection in Le Figargo.

“Virginie got personal. Her review was only a little about the clothes and a lot about me. That’s what I had a problem with, and that’s what I think is wrong. Really wrong. Say the clothes are the worst clothes that I’ve ever seen, but you don’t need to start talking about the person or their personal life. It was wrong. But, I didn’t ban her. I’ve never banned a journalist in my life.” (Paging Hedi Slimane!)

“François Jr. [François-Henri Pinault] was not very kind to me in a recent New York Times article, and this is on the record by the way. All I can say is it’s much easier to wind a watch than it is to build a watch. You have to be careful because if you wind it too tight, it stops. He was incredibly rude about me in this piece. I couldn’t believe it. We had a non-disparagement agreement in place and I have to say, he basically threw it out the window. That may sound like bitter grapes and I’ll regret having said it to you, but whatever.”

Shot of The Daily: ALT, Mia, and Lorenzo Martone