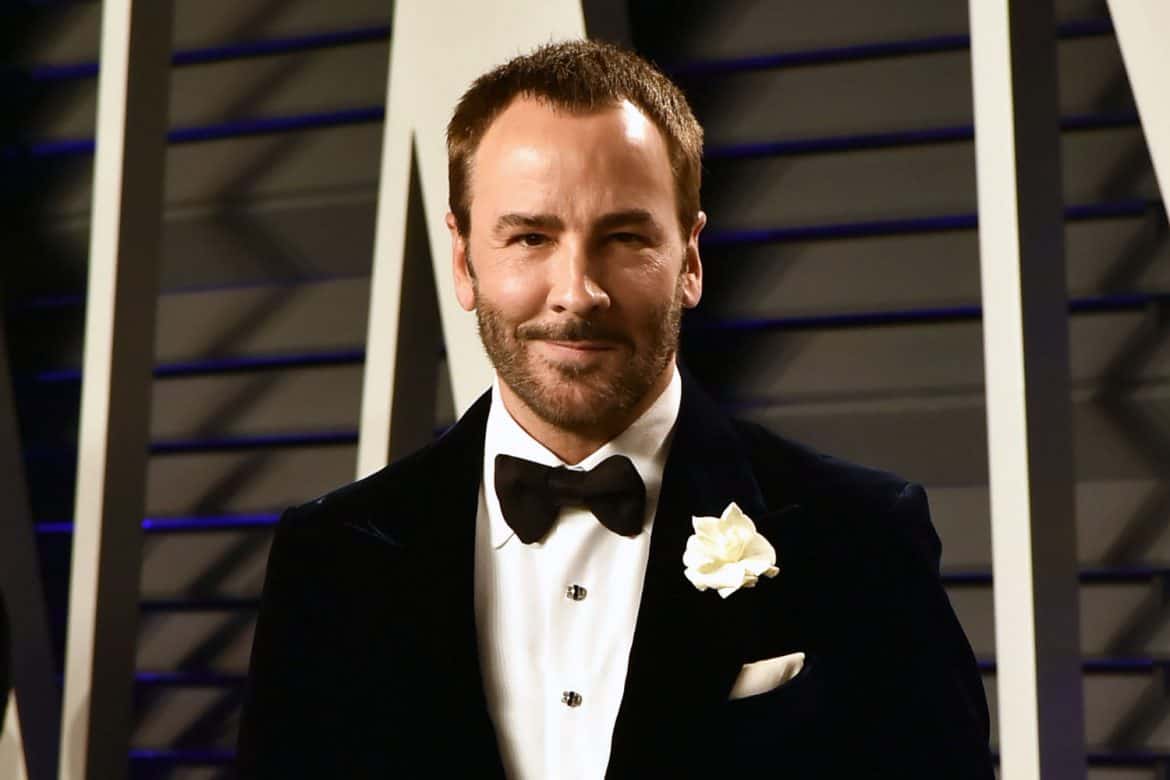 Earlier this morning, we covered how Tom Ford told Vogue he wants to shake up the CFDA Awards by making them more international. But his profile in the magazine was far more extensive, with some amazing quips about streetwear, success, and how fashion has changed in the era of Instagram and #MeToo.

He and his son influence each other’s color preferences.
Richard Buckley, Ford’s husband, thinks the designer and his son have had an influence on the colors they are attracted to.  “I think his fall-winter 2013 collection, with its clashing colors and patterns, was a direct result of Jack being in his life,” he said, drawing a connection to Jack’s brightly colored toys being in the house. It works the other way around, too. “Now Jack tells people that his favorite color is black. At the Hammer’s K.A.M.P. in 2017 one artist asked the children to paint rainbows, and Jack painted arc after arc in black.”

Tom Hanks is a good buddy.
At one point the profile turns towards Ford’s film work, and Tom Hanks chimes in. “I’ve made a lot of films, but I find myself listening to Tom talk about directing a lot,” he said. “Of course I still ask him fashion questions like a pilgrim who has climbed a mountain in search of wisdom, and he has imparted the most simple of answers: Button the jacket, as it slims your form. Use the pockets, as a jacket is like a man’s purse — just don’t get bulky. Cap-toed shoes go with everything.”

He gets philosophical about aesthetics.
“Beauty gives me great joy, but it also gives me great sadness… When I see the rose, and I smell the rose, all I can think of is that the rose is going to wither and be dead. But that’s one of the things that endows it with its beauty. If it were permanent, you wouldn’t even notice it.”

He’s surprised by his own success.
“I have a very hard time taking compliments, or complimenting myself,” he explained. “But I sometimes have to stop and think, Wow: How am I wearing Tom Ford underwear right now, a Tom Ford watch, Tom Ford cuff links, a Tom Ford shirt, a Tom Ford suit, Tom Ford shoes, Tom Ford glasses, Tom Ford moisturizer, Tom Ford bronzer? How is there a Jay-Z song called ‘Tom Ford’? In 12 years, how did that happen?”

He’s not into streetwear or athleisure.
“Younger women don’t wear clothes anymore. When I was young, they had day, they had afternoon, they had cocktail, they had evening. Now, whether they’re a New York socialite or a movie star, if they have to go to lunch, they drop the kids off in leggings, then they put on a pair of heels, maybe a jacket. But they want a fucking amazing evening dress, and I have no problem selling $20,000, $30,000, $40,000, $50,000 evening dresses.”

He thinks advertising has changed after #MeToo.
Ford gained notoriety at Gucci not only for his designs, but for his risqué advertising as well. But he doesn’t think the same ads could run today. “I wouldn’t shave a G into somebody’s pubic hair anymore,” he says. “Political correctness has become fashion correctness, and you almost can’t say a thing about anything. But the bottom line is that I like the way women’s bodies look, I like the way men’s bodies look. My own persona remains sex, even if I’ve moved on to a different stage in my reality.”

On how fashion week has changed.
“The point of a show now is to create an Instagrammable moment,” he says, “and the reason that you have to show in a Fashion Week, in a key city, is that you need as many of the people that people care about in one room at one time to shoot those images all over the world. The images of the show, the front row, the backstage, the makeup, the hair, the clothes, the people, the boyfriends, the girlfriends—and then have it reposted and reposted and reposted and reposted. That’s what a show is now.”

He would like to dress Pete Buttigieg.
“Obviously he can’t wear my clothes… They’re too expensive, they’re wrong, they’re not made in America. And besides, whatever he’s doing is working. So does anyone need to fuck with it?”

7 Things Influencers Want Brands to Know About Working With Them