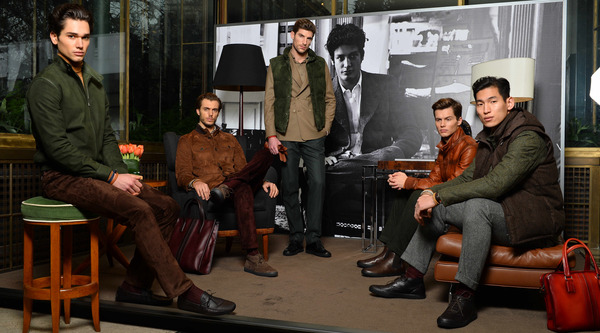 (NEW YORK) Good news, hommes: Tod’s is adding to its selection of menswear for Fall 2014. The Milanese luxury brand unveiled its first-ever full presentation of men’s ready-to-wear, complete with 20 male models at the Tod’s-owned Villa Necchi in Milan during men’s fashion week. In seasons prior, the menswear range has been just a small offering of what was mostly outerwear displayed hung in big leather trunks or on bust forms.

Tod’s recently expanded their womenswear offering as well, under their new creative director Alessandra Facchinetti. The outcome was widely lauded by the industry. However, the menswear line is being designed by an in-house team and will be produced internally. The collection will include polos, shirts, pants, sweaters, and, of course, outerwear. As for the fabrics? Expect plenty of the brand’s signature leathers and suedes, plus cashmeres, velvets, and combed wools.

Functionality is also key in the new collection, thanks to multi-pocket systems and removable and separable pieces. These chicly wearable offerings include a new ultralight version of Tod’s iconic Gommino shoe and a bag called the Script Bag that comes with a removable inner bag made for business travel. A line of jackets called Passport is also being introduced, that’s meant for travel and will be made from calf, velvet suede, and nubuck suede with removable or detached linings. In other words, not the kind of thing you’ll be seeing in coach class.

Who Are The Most Eligible (Gay) Bachelors In Fashion?