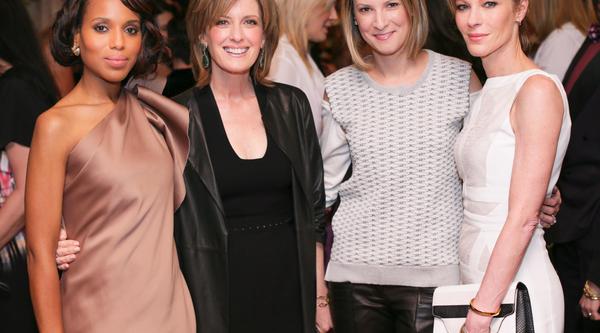 (NEW YORK) Last night Tod’s and ELLE held a dinner at Il Buco Alimentari & Vineria in New York’s Noho nabe for the magazine’s latest cover star, Kerry Washington. The always impeccably dressed Washington showed up in a neutral one-shouldered Lanvin dress with a gold studded Tod’s clutch from Alessandra Facchinetti‘s debut collection. What was her favorite moment about being on-set with ELLE? “They have a brand new fashion director [Samira Nasr] and I’ve known her forever,” said Washington. “It was her first cover so I got to do it with a friend. She’s one of the first stylists I ever worked with.” As for what she was lusting over mid-shoot, Washington didn’t hesitate: “Those Tom Ford boots!”

Editor-in-chief Robbie Myers was on hand to toast Washington and her latest cover and said of the star, “She’s been extremely gracious and it’s so nice when they are actually happy with the shoot and happy with the story.” Meanwhile, other ELLE staffers like Joe Zee and Anne Slowey were also present for the big bash. Apparently, Zee and Washington go way back. “I don’t even know if she’ll remember, but I worked with her 100 years ago for a portfolio in Details called ‘The Next Big Thing’ and she had only done Save The Last Dance. That was my favorite movie,” said Zee. “At the time, I was telling her I was obsessed with her. I styled a picture with her and another budding young actor which people may know, Jake Gyllenhaal.”

Slowey showed up in style, donning Balenciaga, YSL, Chanel, and Céline, or “all the fashion ABC’s,” as she put it. “This is old Balenciaga and old YSL, so Nicolas Ghuesquière and Stefano Pilati,” she told us. Noted. While Slowey didn’t write the Kerry Washington story, she did give us a little insight into the editing process: “When Robbie was asking me about a headline I was like, ‘I don’t know, but just think about her as this powerful woman. I mean she’s having sex with the President [in her TV show Scandal].'”

Later in the night, guests like Iman, Olivia Chantecaille, Marjorie Gubelmann, Narciso Rodriguez, Hilaria Baldwin, Julie Macklowe, Lori Goldstein, and Washington’s fellow Scandal cast members Bellamy Young, Katie Lowes, Darby Stanchfield, and Guillermo Diaz showed up in support of the actress. Upstairs the chic attendees were treated to a three-course meal in the open loft dining area as Washington graciously thanked the crowd: “I feel very, very blessed that ELLE would allow me to grace the cover, and I’m very grateful to them for writing an article that makes me look much better!” said Washington. “I wish you all the kind of joy, love, and gratitude I feel in my heart right now.”
PAIGE REDDINGER

Donatella Does It Versace Style In Manhattan