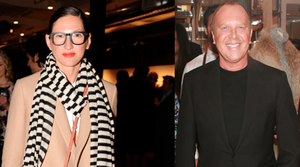 (NEW YORK) TIME released its annual roster of “100 Most Influential People in the World,” and a couple of fashionettes made the cut. On the design front, Michael Kors and J.Crew wonderwoman Jenna Lyons both got the TIME treatment. From a business angle, it comes as no surprise, perhaps, that UNIQLO’s top titan, Tadashi Yanai, got a nod as one of the weekly newsmag’s 2013 lineup of influencers.

Zac Posen penned the brief writeup on Kors for the mag, including some of his earliest memories of the designer. “When I started designing fashion in high school, around 1996, Michael Kors was the epitome of the new look of American sportswear: elegant luxury, easy glamour and effortless chic,” Posen writes.  Posen also waxed poetic about Kors’ bubbly demeanor: “He’s larger than life, a ball of energy and so warm and personable.”

Lyons got written up by Prabal Gurung, who recalled his first encounter with the J.Crew alum of 22 years: in contestant-judge mode, when Gurung was gunning to nab the CFDA/Vogue Fashion Fund. “I’ll never forget when I walked in: I saw her, immediately made eye contact with her, and she was the one person out of all the judges who was beaming—smiling from ear to ear. I thought, Thank God,” writes Gurung. “That tells you a lot about her. She’s always on your side, not just as a person but as a designer for a billion-dollar brand.”

Other chic types mingling among this year’s top 100 include Jennifer Lawrence, Jay Z, and Kate Middleton. The former two are among the seven influencers du 2013 to get TIME‘s cover treatment for the special issue, five of which will hit domestic newsstands. Having a slew of covers instead of one (of, say, a collage of 100 tiny photos of every single list-maker), is a TIME 100 first, just in time for the mag’s 10th anniversary of the annual round-up. Check out the full list here, and/or fetch your issue tomorrow if you’d rather pore over the 2013’s most important on paper.
ALEXANDRA ILYASHOV