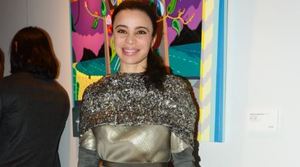 (NEW YORK) A designer to definitely keep on the chic radar: Tia Cibani, who celebrated her grown-up collection with piles of confetti lining the floor of the art world adored Paul Kasmin Gallery during NYFW. With the ability to mix high-brow art, skillful execution and a playful touch, this designer has not only done her homework, but she’s been trained by the best. We discussed Cibani’s gig at Ports 1961 (quite the prolific ascent indeed!) and worked our way to her current eponymous label.
BY DENA SILVER

How did you start out in the industry?
I was always interested in fashion, and as a young child I used to manipulate my clothes, so it was a natural progression for me to study design. I came to New York and went to Parsons, but before I finished my program, I had the opportunity to go to China for a six-month internship. I was the intern that became the assistant that became the designer that became the head designer.

What company was that for?
For Ports. My first and only job!

How did you know it was time to step away from Ports?
I was working with the Ports 1961 project and since I was based in China but focusing on the market here, the travel was getting really intense. It’s 16 to 18 hours of flying; it was grueling and I got to the point where I wanted to start a family. When I was six months pregnant, I took a courageous step to start Tia Cibani.

Was it an amicable split?
I lived in China for 10 years without pursing a personal lifestyle, so Ports understood why I wanted to leave. It was great, but I knew it wasn’t where I would end up permanently. Then I met the right guy and it just felt like the right time to step away. So they told me to go for it.

How’s your relationship with the brand now?
We’re friends! Plus, my boxes always get delivered to the Ports 1961 store downstairs, so they’ll stop by my studio and drop it off for me.

What’s the main difference working at Ports 1961 and running your own label?
This is a more intimate project. At Ports, it was me with a big team, and they’d all have an influence on the collection. There were a lot of pieces to the puzzle. It’s a smaller team here, so this label is a truer version of me.

How many people work for Tia Cibani?
Just me and two other people. We outsource sales and we also have contractors in the Garment District. It’s been just the three of us since the beginning.

Why did you decide to produce your entire line in New York?
I wanted to minimize my travel! But also, New York’s Garment District had me super excited by what I was discovering. I enjoy contributing to the industry here and aid in its revitalization. However, I do source my fabrics all over the world, from places like Japan, Italy, and France.

Do you have a favorite dive bar?
I think I’ve outgrown dive bars. I do have a wonderful Japanese pub in my neighborhood called Izakaya Ten. It’s on 10th Avenue and it’s actually a food-based Japanese dive bar.

Do you have a good luck charm?
I have a vintage Chinese jacket that was given to me as a gift. It’s been my good luck charm and I have worn it to many, many fashion weeks.

Catch phrase, please!
‘Do what’s in front of you.’

Do you have a midnight snack?
Olives, because I like salty things.

Favorite iPhone app?
Epicurious, because I like to cook!

What’s your daily news source?
It’s a cross between two. I read Women’s Wear Daily and Business of Fashion for my fashion news and The New York Times for everything else.