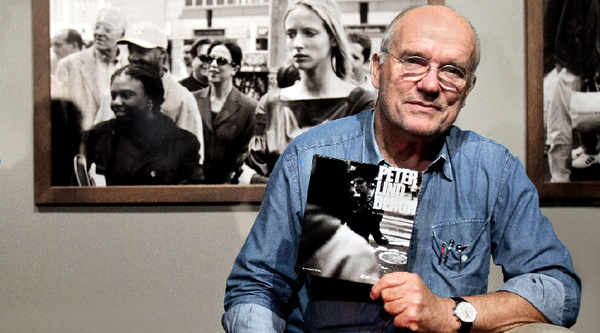 Since shooting Anna’s legendary first Vogue cover circa 1988, the inimitable Peter Lindbergh has photographed everyone from Naomi Campbell, Cindy Crawford, and Linda Evangelista to Madonna. A crop of 35 shots hand-selected by the icon will be on display at Valdimir Restoin Roitfeld’s UES gallery at 5A East 78th St. through October 4. So how does he feel about the perils of Photoshop, all those celeb magazine covers, and the newest crowd of young artists?

Confession: Of all of the iconic supermodels you’ve shot, who’s the most fun to shoot with?
If I answer that question, I would be killed by tomorrow.

What do you think of the modern mania for retouching?
The ease of using Photoshop shows a contemporary image of women that is totally unacceptable. Future generations will ask themselves what our problem was and why we loved to create these monsters of perfection.

What would you change about the fashion business?
I would wish for less marketing and more “naiveté,” knowing that I’m the one who’s “naive” here. There is this ruthless copying of the people with talent from the people with less talent. You see photographers working in their studios with other photographers’ pictures on the walls for inspiration. Nobody just sits down and thinks what he wants to do! All these images will not last long.

What do you make of celebs replacing models on the covers of fashion magazines?
Covers are there to sell magazines. I think actresses are more interesting than models at this moment, but that might change again.

How did Vladimir approach you?
We’ve known each other through Carine [Roitfeld] and from amfAR events in Cannes. I was impressed to see him open his gallery, and by the shows he has done. When he came to us proposing a show, we did not think long! He’s a great young spirit.

What’s your favorite photo in the show?
This might change from day to day! But I think my favorite portrait in the show is of Amber Valletta looking down on Fifth Avenue from a Rockefeller Center balcony. There is an incredible magic in her face.

Will your kids pursue photography?
Yes, I have a son who is an art photographer; he works with his girlfriend under the name “Lucie and Simon.” They are both very strong and passionate. He’s trying hard not to be known as my son, but his images are amazing and worlds away from mine.

What do you like to shoot when you’re not shooting fashion?
I’ve been working for more than a year on a very special project called “Testament,” which is about filmed portraits of death row inmates who have no possibility for appeals anymore. The inmates are filmed for 35 minutes very close up, while looking in a small mirror. No words are used, no talking, no explaining, no questions, no answers.

What Are You Over, Chicsters?

Catching Up with the One, the Only…Linda...