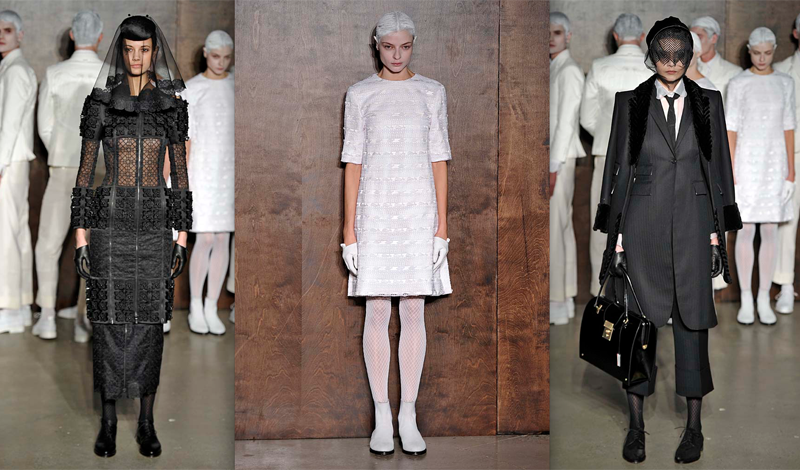 At Thom Browne‘s latest show, guests were perched on wooden bleachers facing each other, peering down at a model in all white, seemingly dead and lying flat on a stretcher as two male nurses with angel wings embroidered on their jackets circled her curiously. Then Björk’s melodic wailing came on the speakers and it began to fake snow. The model suddenly awoke, sat up and was wheeled off backstage on a gurney. What followed was a procession of mostly black clothes that felt funeral-esque (were we mourning the fallen waif in white?), as if an Edward Gorey drawing came to life. Browne is a master showman and the set, resembling an austere British medical clinic at a fancy university, was quite impressive. But it was the clothes that were showstoppers.

Models stared out at the audience as if we were the medical experiment on display. Their hair was waxed down to show off sculptural hats that resembled Gatsby-era hairstyles or exaggerated seagull wings. Philip Treacy would approve. A genius at tailoring and detailing, Browne’s looks were pulled together with mink trim, his signature woven grosgrain, silk satin, raffia tweed, beaver, rubber, mohair and a jacket with bugle beads that was like the inside of a Victorian jewelry box that might be used to store the ashes of a departed loved one. A white lace shirt with a black lace tie was covered with a raglan jacket. Plus, the necklaces and long earrings made of black horse hair. Sure, the mood was serious and somber, but the clothes had life. Breaking up the widow’s-walk mood were large, happy whales that appeared embroidered in satin on skirts or dresses, and as a handbag in pebbled leather, the whale’s tail bobbing behind the mod as she walked.