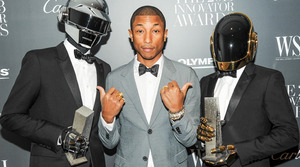 (NEW YORK) When it comes to inspiring, intriguing to-do’s that sort of resemble a dream dinner party year after year, WSJ.’s annual Innovator Awards is the newbie to watch. Last night marked the glossy’s third go of the event. The result? Success. Sequins (by Atelier Versace, donned by Gisele Bündchen). Stylish folks (an exceedingly vast number of them, really).

First up, a few check-ins with the array of fashionettes in attendance. The likes of Proenza Schouler’s Lazaro Hernandez and Jack McCollough, Thakoon Panichgul, Valentino, Giancarlo Giametti, Thom Browne, Johan Lindeberg, and Balmain’s Olivier Rousteing moseying around the MoMA for the event. On Phillip Lim’s to-do list for the eve? “People watching!” Also, some hobnobbing with old pals and meeting new friends. Clearly, a good place for doing all of the above. When it comes to Thanksgiving, Lim breaks tradition (a bit). “I like to celebrate before or after the holiday—to avoid the crowds. I just have friends over and do something intimate.”

The turkey-centric holiday won’t be much of a break for Calvin Klein’s Francisco Costa, however. “I’ll be working! We have a collection three or four days later.” Busy, busy.

When it’s time for Joseph Altuzarra to hunker down and, well, innovate some new collections, there’s a favorite room for that: “I like to draw in my kitchen!” Just don’t expect the designer to multitask much—eating and drawing do not go hand in hand (or mouth?) for Altuzarra.

Now, for some winner chatter: “When you feel like you’ve been in the counter culture, and all of the sudden you’re in the mainstream, in The Wall Street Journal, and being thought of as an innovator? It’s just great.” Alice Waters told us of her win in the Humanitarian category. To present the foodie icon with her award? Momofuku’s David Chang, who adorably bear-hugged the ultra-petite Waters, aka Chang’s “Berkeley mother who’s not Korean.” Aww alert.

Amid the buzzy klatch in attendance, the biggest tapis rouge flurry was caused by (shocker!) Bündchen. The reason for her presence: the supermod appears on the mag’s Innovators issue, thus serving as on-stage arm candy (times two) for Daft Punk’s Guy-Manuel de Homem-Christo and Thomas Bangalter as the duo accepted their Entertainment award from Pharrell.  Other mods turned out gloriously for the event included Karlie Kloss, Constance Jablonski, and Jessica Hart.

Andre Leon Talley playfully intro-ed make-up maven Pat McGrath, who nabbed this year’s Fashion category win. ALT’s vignettes about McGrath included tales of sassing her backstage at Valentino for nibbling on macarons (to the delight of Anna Wintour, in the moment, and last night’s crowd, in the retelling).

Also in the winners circle last eve: Korean artist Do Ho Suh scoring in the Art category, landscape architect Thomas Woltz’s win for Design, David Adjaye’s nod for in the Architecture realm, and Nick D’Aloisio sweeping the competition for the Technology accolade.

As for the unofficial hostess, that would the mag’s editor-in-chief, Kristina O’Neill, whose gig went official exactly a year ago, on the morning of the second annual Innovator Awards. “It’s amazing to see the magazine come to life in event form—not many events are literally the page coming to life,” explained O’Neill. Any teasers on WSJ.‘s next big moves? “That’s part of innovation: you keep it a secret until you’re ready to pull the hat off!” Touche. Her biz partner in crime, WSJ. publisher Anthony Cenname, donned some chic black patent leather sneakers for the occasion, and got pretty heartfelt in his closing remarks post-din. “You all make me proud to be a publisher,” Cenname said of the mag’s team.

Now, we’ve just got to wait a full year for the event’s fourth annual eve to delight us yet again with that lustworthy supper shindig kind of vibe. Who’s going to be at the table next time, guys?
ALEXANDRA ILYASHOV

Henri Bendel Turns To Al Hirschfeld For The Holidays