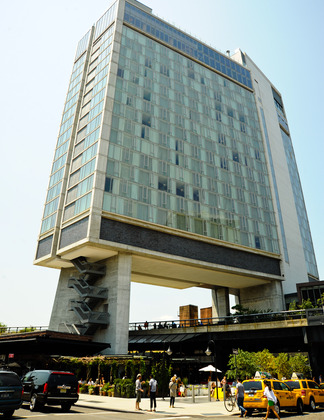 After the longest winter in recent memory, more signs of spring truly being here are heading our way. Like what? Well, André Balazs has announced the return of The Standard Plaza café. The outdoor seasonal eatery is situated at sidewalk level outside The Standard, right next to the High Line, will unveil a new pizza-themed concept this year. For those keeping an eye on their waistlines, salads will also be available, but doesn’t a Maitake Mushroom pizza sound so much better? The Standard Grill’s executive chef, Dan Silverman, will oversee the menu, alongside Frank Pinello, current owner of Best Pizza in Williamsburg and formerly of Roberta’s, who will serve as the restaurant’s pizza consultant. (We want that job!) The Plaza will also present Kenny Scharf’s new sculpture “Red Scary Guy” this summer during Frieze New York. See you there!

bar III: This is #MyReality

Exclusive! DvF and Mayor Bloomberg Are A...