The Oz Borns Are At It Again 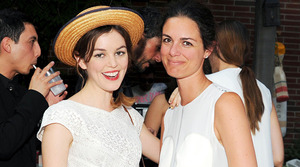 (NEW YORK) Think a little heat wave’s going to get in the way of Australians (and their American groupies) having fun? No way, mate! On Tuesday night, the Australian Fashion Foundation had their “5th Annual Summer Party” at Nick Hatsatouris and Lincoln Pilcher‘s new outdoor venue Gilligan’s at the Soho Grand Hotel. The event, generously sponsored by Woolmark, brings together all the Aussies who’ve made it in New York (also known as tall poppies, according to an Australian slang dictionary) to come out to raise money for the next generation of fashion kids from down under who desire professional experience and a foot in the door in Manhattan and now Europe.

Calvin Klein’s Malcolm Carfrae is one of the organizers of the event and tells us why this side project has become so important to him: “I keep doing it because talented young Australians who want a future in fashion need a hand in making international connections,” he explains. “We’re giving them opportunities they’d never have being so far away. The whole Aussie network gets excited about it because it’s in the middle of summer and Australians appreciate a hot summer party and we’re able to help the young generation in the process.” Braving the hair dryer-esque heat to enjoy the tastes of Svedka Vodka and Rousemount wines were Dree Hemingway, Francisco Costa, Italo Zucchelli, Nora Zehetner, Ben Watts, Rachel Roy, Kate Lanphear, Ajak Deng, John Wattiker, Laura Brown, Bekah Jenkins, Cory Bond, Dani Stahl, Steven Rojas, and Sarah Wynter. “It’s fantastic to see my people!” Harper’s Bazaar‘s gregarious Brown tells The Daily. “We flew a long way to get here and we’ve worked really hard to get you Americanos to allow us to stay here so we need to celebrate that. There’s still a bit of those Australian teenagers inside of us who can’t believe we’re here. We really appreciate it so it’s nice to be around other people who feel the same way.” Sweet. Now when does our honorary Aussie citizenship arrive, Mr. Carfrae?
BY EDDIE ROCHE