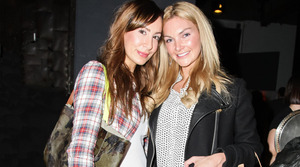 Even the Gansevoort Hotel’s Exhale Spa contributed to the event with free massages. “What you have to know is that this neighorhood is a real neighborhood,” von Furstenberg told us during the event. “We get together and make things happen. The first thing we did years ago was turn it into a historical preserve to make sure the area was always preserved. Then we got involved with the Highline; then we called The Whitney. It’s a neighborhood we care about. There’s a lot of great things coming!” What are her fave haunts in the hood? “I move so little! I’m on the top of my tower there. I like the fact that it’s all there! I’m the Godmother of the neighborhood! I can’t escape it.” Who would want to, DvF?
EDDIE ROCHE

Big Plans For Bergdorf's: What Does President Joshua Schulman Have In Store?

Alice + Olivia and Neiman Marcus to...