The Kid Stayed In The Picture: Meet Desiree Gruber! 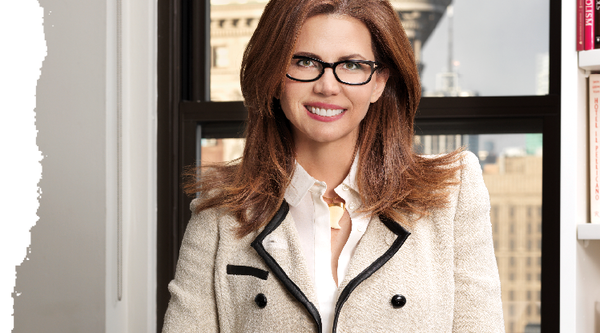 (NEW YORK) Full Picture founder Desiree Gruber turned Heidi Klum into a global brand and Project Runway into a ratings juggernaut. She is a one-woman marketing machine, a true entrepreneur, and one of the nicest gals in the game. Hear her gentle roar! BY EDDIE ROCHE

Let’s go back to the beginning: How did Full Picture start?
After I’d been at Rogers & Cowan for eight years, my dad and my brother encouraged me to go do my own thing. I named the company Full Picture because I thought it’d be great to help clients develop other projects beyond just doing their PR. We started with PR, production, and management, and then obviously digital happened so we had to catch the digital wave. I was brought up to think there are no limits—whatever you’re interested in, give it a try.

Who were your first clients?
Victoria’s Secret was super generous; we also had Heidi Klum, Roberto Cavalli, and a few other brands. We were profitable from day one, though. It wasn’t like I had to bring all my savings in here and sweat it out those first few months. Then we started incubating ideas for TV shows. At the time, [Full Picture exec] Jane Cha Cutler was spending time in L.A. meeting writers. In Hollywood, the whole production thing is so complicated! But I think the fashion story hadn’t been fully told on television.

Which leads us to Project Runway. You’re a creator and an executive producer of the show. It’s worked out pretty well, huh?
Project Runway is a love letter to the fashion industry! There are very few jobs in New York that give you access to stand next to Michael Kors and see what he thinks about your work. How many internships does he have available? An internship for Michael Kors went at an auction for $25,000. Some people watch the show and might not have the skill set, but ask themselves what else they can do. There are different ways to get into fashion; the industry has a lot of room for creative people.

What’s Full Picture up to these days?
We’re about putting a brand at the crossroads where other cool things are going on. We help people tell stories in every way possible, from actually getting articles in magazines to bringing products to life. If Heidi Klum has an idea for a fragrance, we help her bring it to market. Her fragrance, Shine, won a FiFi award last year and was one of the top five fragrances of the year. Every element of my company had a hand in doing that.

Where does your ambition come from?
I’m super entrepreneurial at heart. My father was an entrepreneur, and he really taught my brother and me. He was a Green Beret, went on to be a state senator, and is currently an entrepreneur. He insisted that as part of my education I join the Army ROTC in college. I hated it at the time—really resented it—but I rely on those skills now. Those leadership skills were instilled in me when I was young. I absolutely utilize them in running my company.

How has the industry evolved since you came on the scene?
When I started in PR, you’d mail press releases out. Next, we were faxing. We had five computers in the office, and you had to share with someone else! Then all of a sudden everyone had a computer on their desk. Now we have huge computers in our purses every day. We still have a lot of ground to cover, but what an exciting time to be in business!

You certainly have your hands in a lot of different pies!
I wake up every day and come to work excited and energized. It’s not a job, it’s a lifestyle. Who doesn’t love seeing what people are buying and road-testing things? [At Full Picture] we live at the crossroads of fashion, hospitality, entertainment, technology.

What’s the deal with your Theodora & Callum line?
As we helped other people tell their story, more ideas started to percolate. It seemed fun to create a line inspired by moms and their experiences. [My business partner] Stefani Greenfield and I talked about being on vacation and having that moment when it’s everything you want it to be. When I shop on vacation, I find some of my best pieces ever! I can never get rid of them—they’re from a moment in time. It’s a memory in your closet! That’s what we’re trying to create with Theodora & Callum.

Wearable wanderlust! J’adore. How important is your Full Pic team?
It’s truly all about teamwork.  No project can succeed in isolation—we maintain that team mentality around here. Our best ideas are vetted,  improved, and eventually executed through team effort. We do group brainstorming, and I build teams with different but complementary skill sets. We also learn from our setbacks and share in our successes.

So who’s on the team?
Jane Cha Cutler was my first executive. She runs production out of the L.A. office. Nicole [Esposito] runs all of PR, Hilla [Narov] runs management, and Liane [Mullin] runs digital. Every week we have a meeting called the “power grid.”

Which means…?
We call it that because when electricity goes out, you can’t operate. If the power plant has a failure, it doesn’t work. The power grid keeps us connected to each other, so we all know what’s happening, who’s doing what in what industry, and what could be transformative.

Are you easy to work for?
I think so! I want everybody here to have a stake in the business, and to go home having learned something—and be better for it. I don’t want people to be here and feel that was a crap day and didn’t mean anything. I take the time to explain things. If somebody does something wrong I say, “That’s not right. This is why…”  I’ve worked with my team for a number of years now; you survive things together. Any mega-event or any major launch is going to have good days and bad days! I don’t want anybody here who’s just making a salary; go work somewhere else. We’re here to learn, to grow, to actually impact the community. We’re bonded together in a way that’s like a family but it’s work.

On the topic of family, where’d you and hubbie Kyle MacLachlan meet?
We met in the chiropractor’s office in L.A. over 13 years ago. We’ve been married for 10 years. We had an awkward conversation because he came up to say hello. I was like, “Why is this person saying hello?” I knew who he was; we had a minute-long chat. The next day I went to the launch party for Talk magazine—I walked in and the first person I saw was Kyle. He asked me out that night, and that was it.

So Tina Brown is responsible for your marriage?
And my chiropractor. We invited him to the wedding.

Do you cook for your brood?
No, I don’t like to cook. It’s not my forte! I can boil eggs. But Kyle’s a chef and he loves it. He plans what we’re going to eat throughout the week. We complement each other on that, then obviously we go out to eat a lot. I mean, it’s New York City!