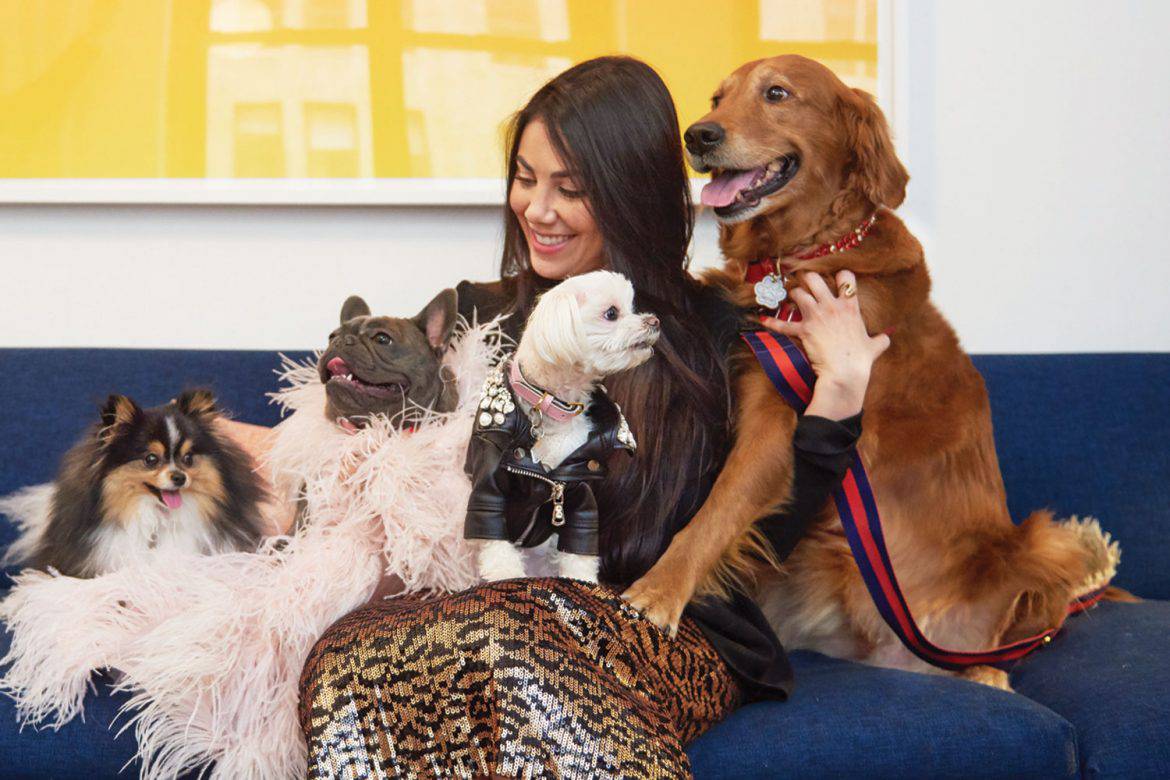 Yes, it’s the age of the influencer — but influencers of the human variety are so 2018. Meet Loni Edwards, founder of The Dog Agency, which is repping some of the most-talked-about pets on the ’gram.

True or false: You used to be a lawyer.
True. I went to Harvard Law School, worked at a big firm in Los Angeles, and hated life. I wanted to do something more creative. I came back to New York and started a fashion tech company, and while doing that I got a dog. She became Insta-famous, and I saw there was a growing influencer world, but there was no structure to it.

How was the influencer business running at that time?
Mostly through DMs and random e-mails. I’d meet other pet influencers, and they’d be like, “I got this contract — I know you’re a lawyer, should I sign this? Is this fair?” After I sold my last company, I decided to open the agency. I have the legal expertise and relationships, and having been a pet influencer myself, I understood the business from that perspective, too. I saw an opportunity to kind of streamline the whole industry. I launched The Dog Agency in 2015, and now, we represent around 160 influencers.

What’s the distribution of your client list among different species?
The majority is dogs, and the next biggest category is cats. From there, we have a handful of speciality pets and some humans, like [veterinarian] Dr. Louise Whitman.

Is there anyone else in your space right now? Do you have any competition?
Not really. As far as the place to go to work with pet influencers? We’re that place. We work with tons of brands, and we are generally their first stop, because we make the process so easy, and we represent a lot of the top talent.

What are some of your favorite recent projects?
We work with brands in pretty much every vertical. We just did a huge campaign with Sony Pictures for Alpha, and we had little screening events all over the U.S. We worked with The Body Shop’s Forever Against Animal Testing campaign. We just did a campaign with Moncler for its new line of dog outerwear. We worked with Neiman Marcus for two of its handbag and shoe books. [My dog] Chloe did a huge campaign with Loft. PetCon is another business — it’s our consumer-facing event that brings the entire [pet influencer] world offline.

What’s that like?
PetCon is a pet lover’s dream. Pets from all over fly into New York for meet-and – greets. There are panels on everything from advancements in animal health to the birth of the pet industry to how to grow your following. There’s also a dog adoption garden and an adoptable cat café. There are also a bunch of booths where people can discover and shop from new brands.

How do you manage dealing with pet personalities and their owners?
When brands want to control the content — during a shoot, for example — we prep them and explain that they need to be patient. With a human, you can say, “Look to the left,” but regardless of how well-trained these pets are, it’s more of a process to get them to do exactly what you want them to do. We want brands to understand that and have fun with it, and be open to more spontaneous content.

Do your pets do editorial?
Yes, regularly. We do editorial, branded campaigns, traditional influencer marketing…lately, we’ve received requests to have our pets appear as cameos in movies. Our business is expanding a lot beyond Instagram, which is cool. People feel like they known these pets — they look at them every day, and they just want to see them in other aspects of their lives.

Business is booming, then!
Yeah, it’s grown a ton. With pets you have all these special, unique benefits that you don’t get with a human. They won’t say something politically charged or offensive, so they’re safe, they’re adorable, they make people happy, they resonate with everyone regardless of age, location, gender, and then their content tends to have a higher likelihood of going viral. When they’re doing a human-facing thing, it’s more creative, and people have more of a reaction to that.

Have you always been an animal person?
No. I had a dog growing up, but it wasn’t really my dog. I didn’t understand what it’s like to have a fur baby that is like your child until I got Chloe. From the moment I got her I was so in love with her and just really understood this dog world. All of this exists because of Chloe. 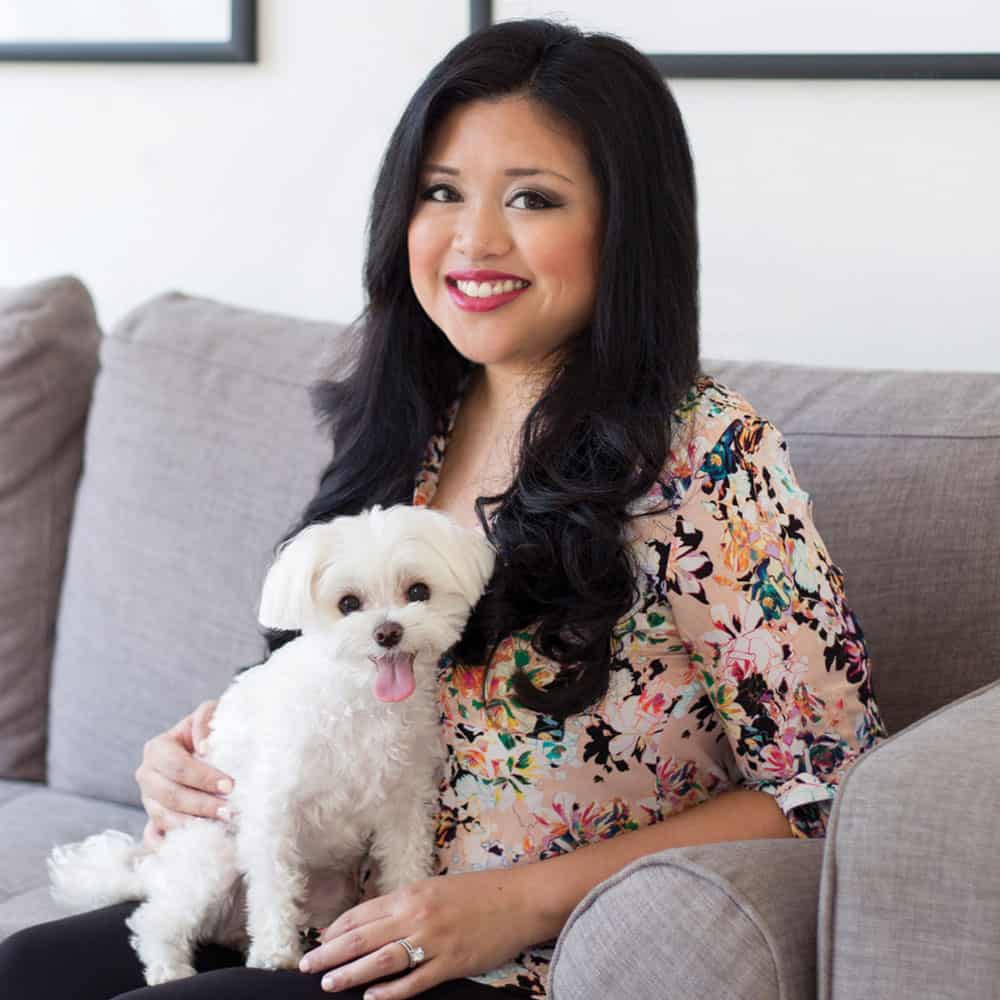 Tell us all about Mochi!
She’s @mochiandthecity on Instagram, and she is a 4 – year – old Maltipoo who lives in Brooklyn. She loves fashion, wine, travel, and basically being the center of attention all the time.

When did you first get the sense that she would be a personality, a character, an influencer?
I started her Instagram account basically right after we brought her home, and her following surpassed mine in a couple of weeks. Once we had around 10,000 followers, brands started reaching out, wondering if we could promote their products, and I was like, “Oh, this is like a real thing.” Once I realized that people were really interested in her, I started to think about who Mochi is, what her life is really like in the city…and I started to think more strategically about the type of content we were sharing.

Did you keep your day job?
Yes, I am a product stylist and a photographer.

What kind of clothes is Mochi into these days?
Her style is “cool Brooklyn girl.” She wears elevated basics — cozy knits in the winter, but also things like a leather jacket. She actually has a lot of faux leather. She wears pieces that are really wearable in the city.

Favorite partnerships?
The ones that involve travel! We traveled to Ritz – Carlton properties in Puerto Rico and Aruba. We’ve also partnered with Google, Disney, Polo Ralph Lauren, and Moda Operandi.

What does she eat?
Fresh gourmet turkey and red quinoa, which is delivered to our home. She won’t drink tap water; Mochi only drinks bottled water, and she really prefers Voss.

Is she into music or TV?
She’s not so much into music, but she religiously watches The Bachelor with her followers on Instagram stories every Monday.

Does she have any pet peeves?
Mochi doesn’t love grass, and she refuses to go outside in the rain. She doesn’t like getting her feet dirty or wet.

Can you tell us about her grooming routine?
She gets a blueberry facial every week to maintain a very white complexion, and she gets a full grooming about once a month. 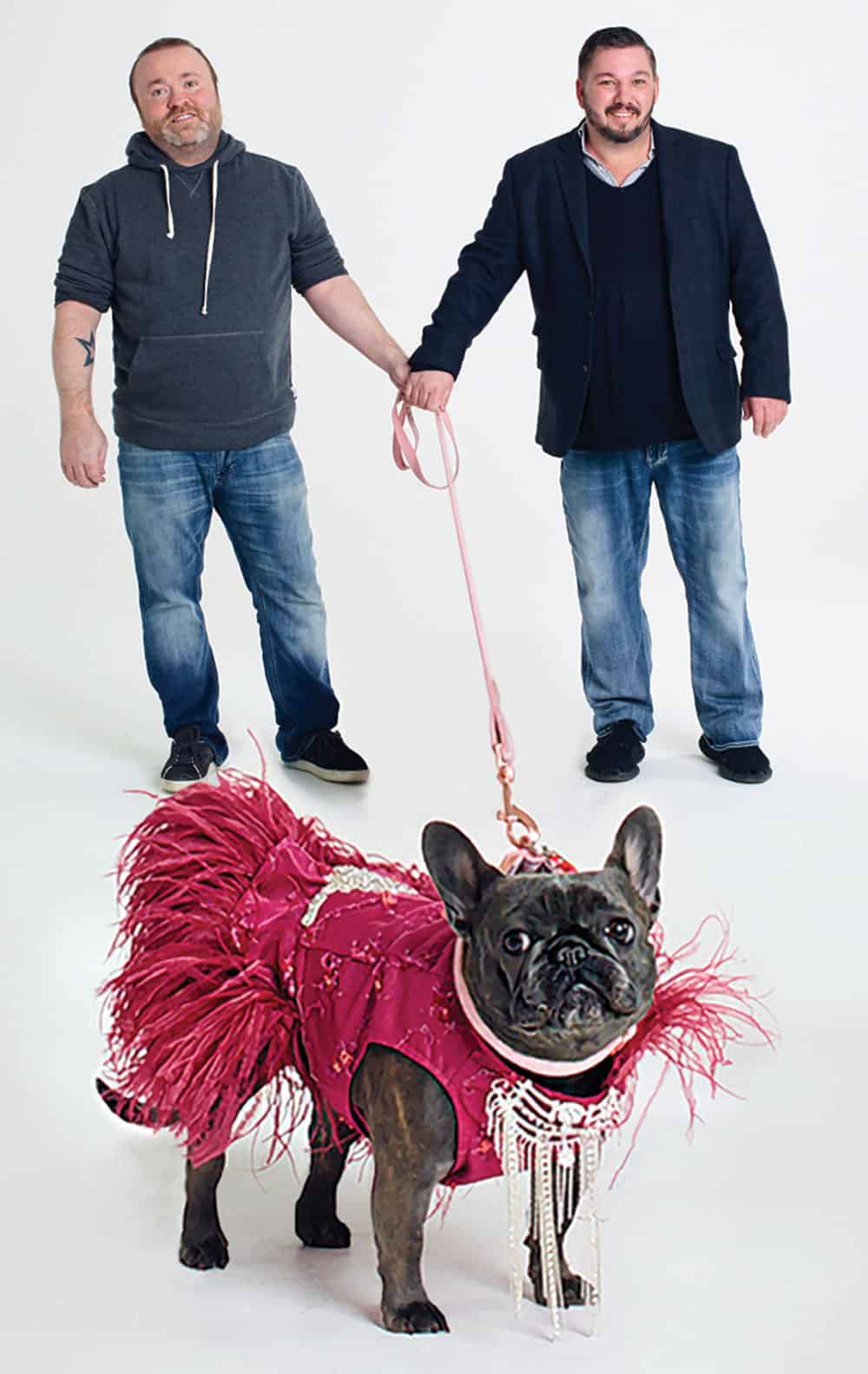 How did Izzie the Frenchie become so famous?
Shane [Jordan] and I got her about two years ago, and we made a video of her in the bath for our friends. We put it online, and the next morning, it had like 12 million views. We live in the Hamptons, where it’s cold, so we put her in clothes to keep her warm. She loved it! She’d go to her closet and pick dresses, and we started sharing that with people. And before you knew it, they started looking at her to see who she was wearing.

Who makes her clothes?
A designer who used to work for Dior, who makes everything custom.

How many Instagram followers does she have?
She has about 130,000 followers @izzythe.frenchie. Last year, she had 450 million views around the world. She’s trending in Pakistan, Turkey, and the U.K. In the past month, she’s been featured in Vogue, Vanity Fair, The New Yorker, People, and Paper.… Her wedding was a brides.com exclusive!

Is this your full-time gig?
We retired. We worked for Hillary Clinton for 10 years. I was her deputy faith advisor. We also have an energy company. We’ve been blessed to be able to have fun with Izzy. She’s a good release for us. We worked in entertainment 20 years prior, and Izzy is the best artist we’ve ever had. We go home and cuddle her, and she doesn’t snap back. She doesn’t have all these big riders, either. Well, she does request a cooling pad.

3. All about Louboutina and Owner Cesar Fernandez 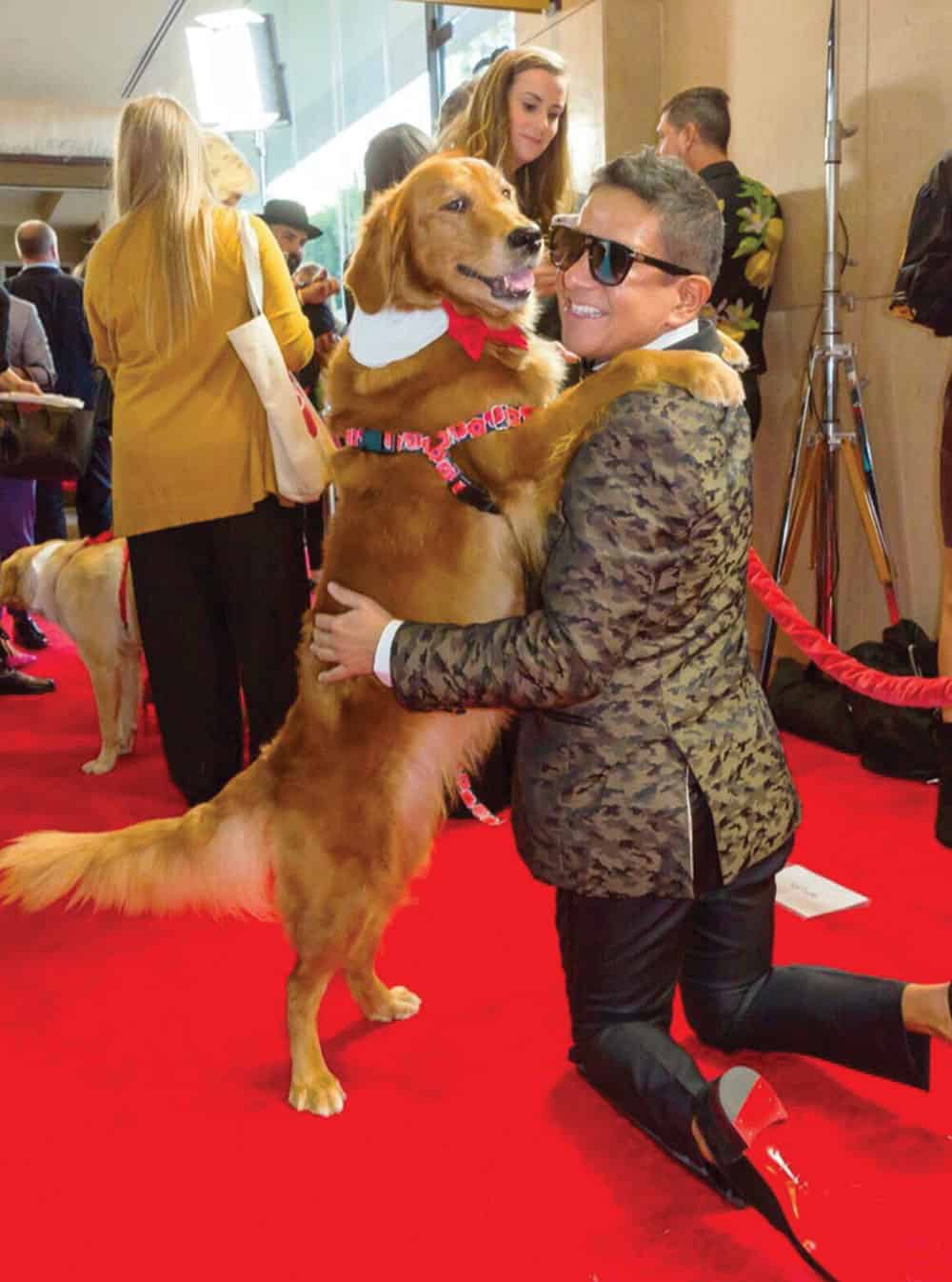 What’s her claim to fame?
It’s pretty simple—she just likes to hug a lot. She was always hugging me on the street, and people were taking pictures of us. She didn’t even have an Instagram at the time, but I was getting messages from my friends with screenshots of her. Little by little, one media outlet led to the other.

Do you have a day job?
Yeah, I’m in health-care management. I never planned to become an influencer—it happened in an organic way—but we’ve done campaigns for major brands like Google, Facebook, and Amazon.

You two travel a lot.
Yes, a lot of her posts are in different countries. We were in the Kolonaki neighborhood of Athens, sitting at a café, when I posted an Instagram story [@louboutinanyc], and soon after, two women were running after us screaming, “Louboutina! Cesar!” The same thing happened in Paris!

What are some of your hopes and dreams for her?
I’d like to do a children’s book that focuses on diversity. She hugs people from any race, gender, and sexual orientation…those situations for me are special.