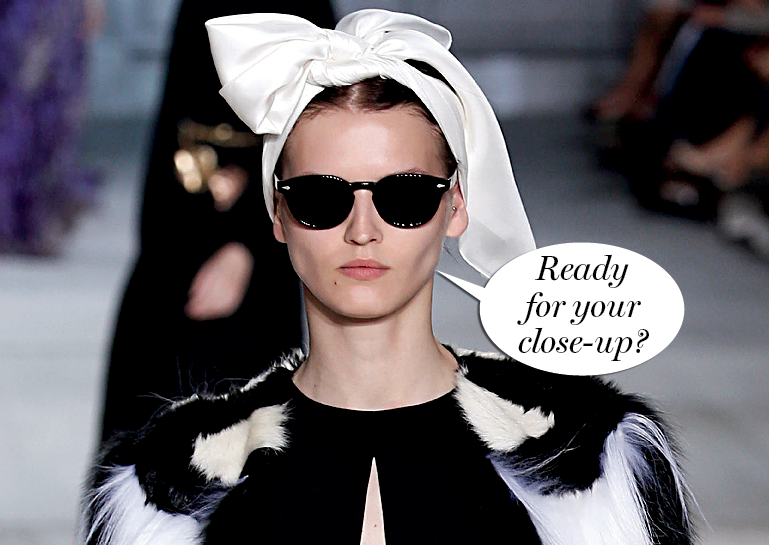 Fresh from the pages of The Daily’s Hollywood Edition…Pool house? Check. Private transcendental chant session with David Lynch? Mais oui! But are you truly one of Hollywood’s fashion cognoscenti? Let’s hope your style intelligence is ready for a workout…

Rodarte’s latest collab?
a. A line of area rugs with The Rug Company inspired by 1970s Cali and medieval romance.
b. A collection of home scents called Black Hole, inspired by the Star Wars trilogy.
c. An NPR-style podcast called “Seriously,” about their love affair with lace.
d. A butter-free Parisian cooking show with pal Natalie Portman.

As a kid in Southern California, Rick Owens…
a. Wasn’t allowed to watch TV until he was 16; immersed himself in opera and European literature.
b. Made pocket money dressing up outside Mann’s Chinese Theatre as Obi-Wan Kenobi.
c. Attended bible-study classes in Malibu led by Dyan Cannon.
d. Harbored dreams of launching a fro-yo empire.

The Assouline book Young Hollywood is…
a. A coffee table tome featuring shots of PYTs wearing Michael Kors, shot by Claiborne Swanson Frank.
b. A beach read about a frozen-food heiress who discovers Hollywood’s seedy underbelly.
c. A visual diary of Quvenzhané Wallis’s outfits while promoting Annie.
d. A series of “after” pics from L.A.’s most talented plastic surgeons.

Who first discovered Gigi Hadid?
a. Guess’ Paul Marciano, who cast her in a Baby Guess ad when she was 2.
b. Tom Ford, after a fender bender in the Maxfield parking lot.
c. Graydon Carter, a major fan of The Real Housewives of Beverly Hills.
d. Grace Coddington, while in town shooting a “Cats Who Surf” editorial.

For the most recent premiere of the Hunger Games franchise, Jennifer Lawrence wore…
a. A champagne-colored cocktail gown from Dior’s 2014 Couture collection
b. A Celine skirt and a T-shirt emblazoned with Ryan Gosling’s face
c. A preview of Beyoncé’s athleisure collection for Topshop
d. Vintage Richard Tyler

Instead of walking in the Victoria’s Secret fashion show, Kendall Jenner…
a. Walked the runway for Karl Lagerfeld in his Métiers d’Art collection in Salzburg, Austria.
b. Finished her memoir, Selfie Aware.
c. Cut an album with Selena Gomez.
d. Co-designed a children’s clothing line with sister Kim Kardashian called North by North West.

Mario Testino’s Hollywood Hills home is decorated with…
a. Pieces by L.A. artists Friedrich Kunath and Walead Beshty and Mauritanian leather–stitched straw mats
b. A triptych of Warhol-style silk screens of Anna Wintour
c. Needlepoint pillows with sayings like “Nothing tastes as good as skinny feels.”
d. A disco ball and white leather; color is verboten.

Where are you most likely to spot fashion consultant Katherine Ross and her husband, LACMA chief Michael Govan?
a. The Tower Bar or Mr. Chow’s, because they remind Ross of New York.
b. Sweating to Taylor Swift songs at Maha Yoga in Brentwood.
c. Waiting in line for artisanal drip coffee at Intelligentsia in Silver Lake.
d. Hiking Temescal Canyon with their poodles, Pollack and Koons.