The Daily Does Sundance 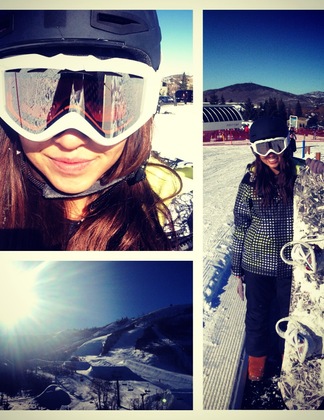 (PARK CITY, UTAH) We’ve been holed up in Daily HQ putting together our NYFW issues, so Samantha Lim, best known as the former EIC of FashionIndie.com, covered all the action in Sundance for us this year. Celebs? Check! Swag? Duh! Films? Even that! Enjoy Lim’s jam packed Sundance diary…

Friday
Park City got creative when it came to setting up screening rooms for the 200 or so films that are shown during the week. Case in point: Jessica Biel’s premiere for Emanuel and the Truth About Fishes was held at the Park City library. As the crowd anticipated a cameo from hubby Justin Timberlake, the starlet showed up stunning but solo. After a successful screening, she spent the night dancing at The Westway’s pop up lounge, which was a shockingly accurate replicate of the NYC stripclub-turned-hipster-hotspot. The parties didn’t stop there: a quick stroll up the street at the Grey Goose Lounge, Daniel Radcliffe celebrated his newly-acquired film Kill Your Darlings, where he played a 1940’s conflicted-gay creative revolutionary (a far cry from his Harry Potter days). Ending the night with a pop into Lil Charlie’s Lounge at the Claim Jumper, I caught up with Adrian Grenier while he was picking up some jewelry from L.A. designer Sara Horne, who just launched her men’s collection. Always in the mood for a good find, I was gushing over her stylish yet subtle goldplated necklaces.

Saturday
A glorious morning on the slopes at the Burton Experience at Sundance! Held at the lowkey Pig Pen Saloon, professional athletes, celebrities, and snowboarding rookies (like yours truly), geared up in Burton outfits and hit the slopes.  Alessandra Ambrosio (who had also hit up the Oakley snowboarding event earlier that same day), Dermot Mulroney, and Tony Danza were just a few faces obscured behind shiny Burton goggles. Ambrosio told me how excited she was to learn to snowboard earlier with Oakley, and that she might try it out again while she was in town. There wasn’t much time to elbow-rub, though, since Park City’s mountains are nothing to scoff at. I was strapped to an instructor for the rest of the afternoon. After enough amateur shredding, I nursed myself back to moviegoing health by hitting a bloody mary bar with a slew of Vermont-themed snacks (nothing keeps you energized on the slopes like s’mores).

As soon as nighttime hit, it was back to the party scene. I stopped into the after party for The East, starring the handsome Alexander Skarsgaard and Ellen Page. As much as I wanted to talk movies with her, I could only talk about her bed|stü grunge-style boots, which she said she’d be wearing all weekend. Tao Group had a mega pop up club, transforming a 30,000-square-foot venue at the bottom of the street into a late night dance party, with a surprise performance by Nas and Lil Jon. Sbe’s Hyde Lounge pop up club was another requisite hotspot of the weekend, hosting the likes of Ambrosio, Shailene Woodley, and Shiloh Fernandez.

Sunday
Just because it’s a film festival doesn’t mean people stop caring about Sunday football. Well, not that I’ve ever cared about Sunday football, but a lot of celebrities certainly seemed to, based on turnout at the the Ainsworth’s Element Electronics Annual Football Viewing Party. I munched on snacks and faux-cheered for the Patriots alongside a very pregnant Kristen Bell, plus James Franco, and Wyatt Russell. Paris Hilton also made a cameo, which ended in her taking home some serious party swag: a 70” Element Electronics television.  Back down on Main St., I stopped by the Miami Lounge to rest my feet…inside a pair of Carlo Pazolini boots. Jane Lynch, Karina Smirnoff, and Joey Lauren Adams all seemed to have the same idea. I also got to try out Skull Candy’s newest headphone gear, which proved to be very helpful in distracting me from tree collisions on the slopes. The lounge was filled with great music, fuel filling snacks (Ever heard of Hint Water? It’s made with fruit oil and is de-li-cious!), and most importantly, cocktails. Sunday night turned into a calorie burning dance party/pose-off with nightlife photographer KirillWasHere, as Johnny Lennon and his 4AM crew, including Jesse Marco and DJ Sinatra, threw their annual Goldbar Sunday Funday takeover at Tao. The dance party went so late, the crowd had to be physically removed from the building.

Monday
On Monday I finally got my bearings in the twisty, spread-out town that is Park City. Thank goodness for all the Sundance volunteers, sporting red puffer jackets donated by the Kenneth Cole and helping with theater navigation! After seeing a couple indie films, the night crept up and it was back on Main Street for the evening’s festivities. Nicole Kidman made an appearance as CAA threw a packed party at the Claim Jumper Hotel. The topic of the week was their risqué burlesque performances that lit the room (and the gossip columnists who were caught sneaking in) on social media fire.

Tuesday
After a full morning of taking in the mountain air, I did some shopping and found some serious fur discounts. As much as I wanted to pick up a head-turning fur thong (fur raccoon tail and all) I opted for a small purse that doubled as a warm hand mitt instead. I ended the evening at Lil Charlie’s Underground Lounge for the Lovelace dinner party. Amanda Seyfried plays 1970’s porn star Linda Lovelace alongside a killer cast including Chris Noth, James Franco, Sharon Stone, and Adam Brody. Half the cast joined for dinner; Seyfreid told me she was “excited for the premiere, but a little nervous about how the crowd would react.” I was mid Instagram (of Seyfried’s necklace) when I noticed the time: my flight back to New York took off in two hours! After a mad dash to my hotel and shared lift with Michael Buccioni from The Rambler, I bid adieu to Sundance and hopped on the red eye back to Manhattan.

An amateur film buff, and an even more amateur snow sport master, I still found my niche in Park City…until next year!

These Are So Much Cooler Than Cabbage Patch Kids…

The Good Wife's Josh Charles Is The...