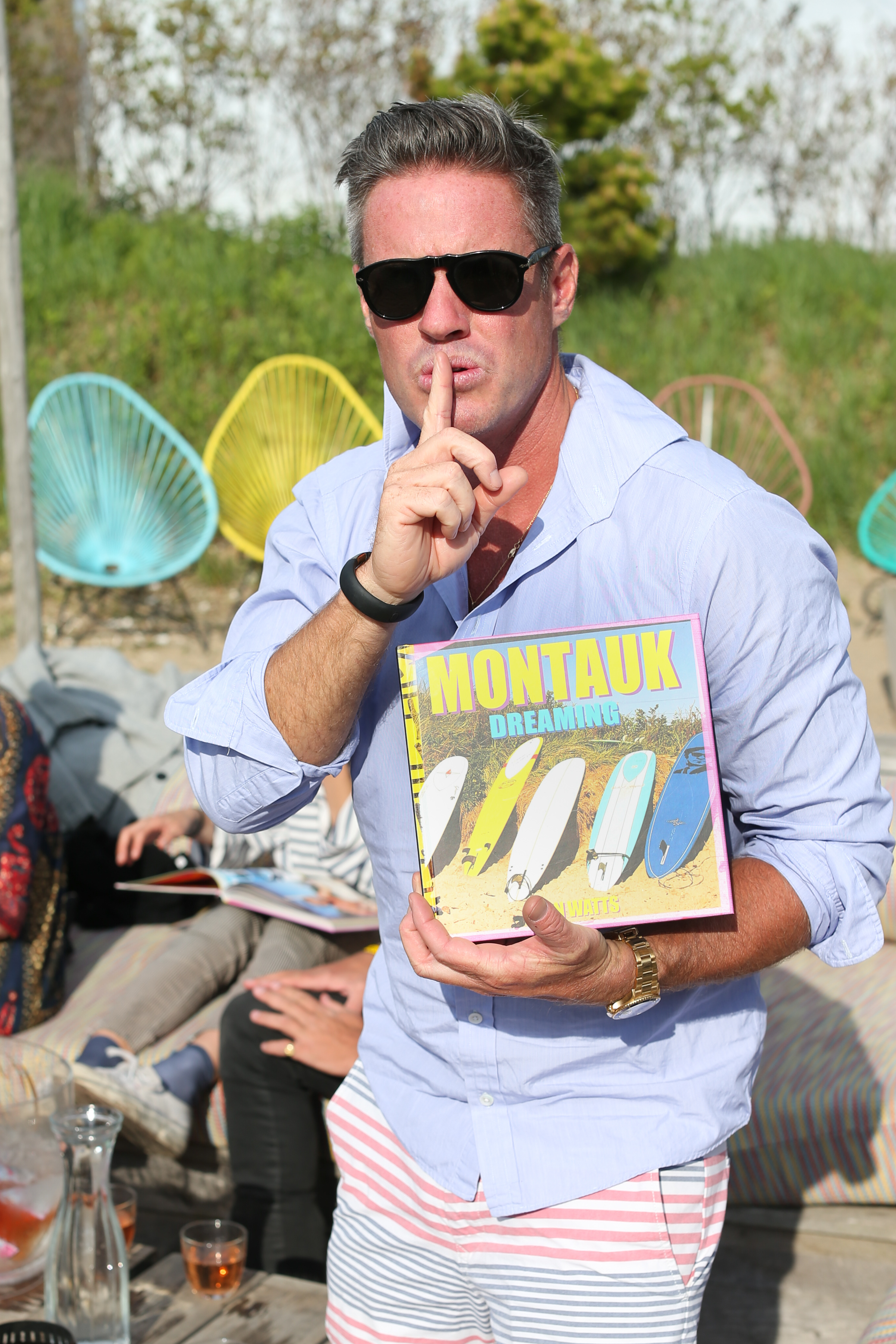 Montauk was a total chic-out this Memorial Day weekend. I take my role as ambassador at The Surf Lodge seriously,  so I decamped chez SL and did not need to budge, as the cutest people on the planet were always all around me. Artist Jen Stark was in residence; she painted the side of the Surf Lodge a rainbow swirl of blazing, bright psychedelic colors which announced that summer had definitely arrived. Jen had a show at the Surf Lodge gallery, and the opening attracted gallerist Eric Firestone (his East Hampton gallery is a must-visit), Kelly Bensimon, as well as  Nell Diamond, who is one of the best-dressed beauties in NYC and the Hamptons. Afterwards, Eric hosted a private dinner on the patio for Jen as the band Capital Cities played to a full house of hipsters outside. I spotted handsome Simon Huck, designer Jonathan Simkhai, Jamie Burke, Mila Dewitt, Lyman Carter, Shinola‘s Hilary Latham, Logan Samuelson, Katie Lee, Steven Rojas, S10 Training‘s Stephen Cheuk (his beach boot camp, near Ditch Plains, attracts all the cool kids), nightlife guru Tommy Saleh, Sports Illustrated mod Hailey Clauson, and her boyfriend, Julien Herrera who teaches boxing at Overthrow on Bleecker Street.

The next day, my pal, photographer Ben Watts, celebrated his book Montauk Dreaming with a roped-off VIP party for all the pretty people Ben hangs out with, many of whom appear in his book. Designer Katie Gallagher arrived with Francesca Vuillemin, Mia Morreti stood on a swing and Ben’s beautiful, blonde young daughter Ruby raced around the sand saying hi to just about everyone. Social media samurai Michael Tommasiello, iPhone 6 Plus in hand, snapped shots of Swedish singing sensation Tove Lo as she performed her hit “Not On Drugs.” I also saw Surf Lodge queen Jayma Cardoso, Kacey Librizzi, writer Jeffrey Slonim, and Johan Lindeberg. Montauk Dreaming is the ultimate summer yearbook of the most stylish peeps that inhabit Montauk, which is truly the Williamsburg of the Hamptons.

The best way to end a weekend in Montauk is to stop on the way back to the city for dinner at Scarpetta Beach, which just debuted at the newly revamped Gurney’s. I devoured a delicious bowl of short rib and bone marrow agnolotti pasta and wild striped bass, gave Fabiola Beracasa a big smooch (she’s having a baby in less than a month), hopped in the car and zoomed back to New York filled with good food and sweet memories of Montauk’s chicest moments. See you at the beach next weekend!

All Photographs by David X. Pruting/BFA.com.

Tracy Anderson On Her New Hamptons Digs And More

As If You Needed Another Reason to...