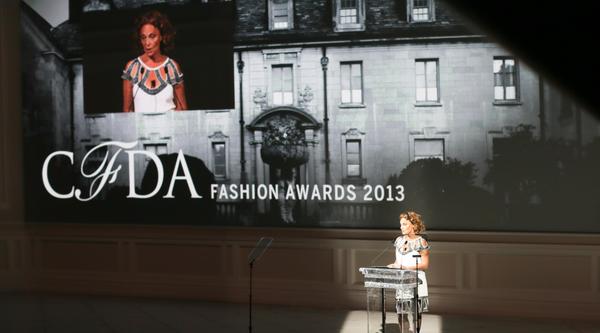 (NEW YORK) By now you’ve caught up on the winners and losers of last night’s CFDA awards, but we were there, of course, and have a few of our own accolades to hand out. We’ll be messengering over our very own Trovas later today…
BY EDDIE ROCHE

Least Surprising Reaction: The crowd went wild when Oscar de la Renta suggested his “best friend” Hillary Clinton should be the next president of the United States. She reacted with humble “Who me?” grins.

Most Delicious Faux Moment: Hillary Clinton’s shocking announcement that now that she’s got more time on her hands after that Secretary gig, she’s going to pitch a new show for Bravo, Project Pantsuit. Hill-arious.

Best Set: There’s not a lot of competition in this category (read: none) but Tony Award winner Scott Pask oversaw the Awards’ set design for the fifth time and it looked like a million bucks.

Andy Cohen’s Best Use of Acronyms: “OMFG CFDA, Secretary Clinton is in the house.”

Best Sport: Lindsey Vonn (World Cup skier and lady love of Tiger Woods) had to take a moment to hit the ladies room when officials showed up to randomly drug test her on the spot. Seriously.

Coolest Cats: The Public School boys Dao-Yi Chow and Maxwell Osborne were ecstatic to take home the Swarovski young men’s design award. Chow revealed in his speech that he had a bet with his wife that if he wins he gets to decide what their kid wears for one year.

Best Sighting We Missed: Hunky Henrik Lundqvist was paling around with Calvin Klein Collection’s Italo Zucchelli. How did we miss this? Francisco Costa was no slouch in the cool date department with Rooney Mara on his arm.

Best Trooper: Hilary Rhoda had to cut her night short due to an early call time today. Womp.

Most Random DJ: Lady Bunny spinning at Tisci’s party. We endorse this, but we don’t often think of Givenchy and Lady Bunny in the same sentence.

Cutest Newcomers: IMG’s charming twin brothers Jordan and Zac Stenmark. Could a male Kate Upton be possible? How about two?

Most Thanked: Anna Wintour. Nearly every acceptance speech took a moment to pay their respects to the Queen. Duh.

Juiciest Off The Record Goss: Which menswear designer is parting ways with the brand he’s synonymous with this week?

Best Vid: Every category had a video shown before the winner was announced, but our fave was male models singing Daft Punk’s “Get Lucky” while showcasing the collections of Duckie Brown, Thom Browne, and Michael Bastian. KCD has cleverly made sure this is on YouTube today.

Best Dressed: As if we’d go there…Everybody gave a look to remember. Check out our Gallery and decide for yourself!

John Galliano Tells His Side Of The Story To Vanity Fair

CFDA Afterparties: From The Four Seasons Resto to Westway

6 Designers Tell Us Their Holiday Travel...