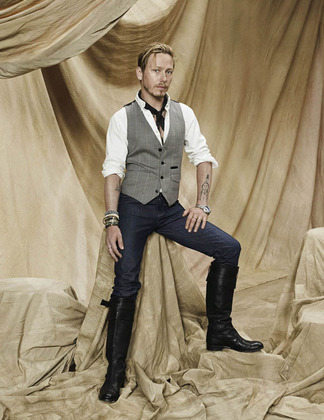 Before she walked in Manolos, Carrie Bradshaw shopped at H&M and Forever21 just like the rest of us. It has been eight years since Carrie captured our hearts and TV screens with her quirky personality and pink tutu and now she’s back…at least her teen self is. Tonight at 8 pm EST with our cosmopolitans in hand we will live tweet and cheers to a new era of Sex and The City (one that’s bound to be more city than sex). But, before that total eighties flashback kicks in, Carrie Diaries and Gossip Girl costume designer Eric Daman gave us the full scoop…

Which signature Carrie pieces will her younger self wear, like her necklace of necklace or tutu)?
I think the signature Mark Cross bag is an instant classic, because it already is: Grace Kelly used to carry one. It’s sophisticated, but doesn’t scream “I am a designer bag!” Splatter some paint on it and you have a personalized, dyed original. You can also expect to see the “C” initial pendant from Alex Woo as a prelude to the signature Carrie nameplate. Also, there will be crinolines galore.

What was Patricia Fields’ philosophy when dressing Carrie? How does it differ from yours?
Patricia was a wonderful mentor; she taught me so much about design and style. She was really about pushing the envelope, being over the top, and incorporating a lot of sex appeal. With teen Carrie, I have to pull back a bit and remember she is a 16-year-old public school girl in suburban Connecticut. Applying the ‘go big’ part for the NYC portion of her storyline but pulling back to give her Connecticut self a more subdued suburban feel. She is at an age where she is experimenting and creating her individual unique style. Keeping all of this in mind when conceiving her look, I wanted to give her a unique point of view, mixing colors and patterns, as well as eras. =  The “sexiness” of Sex and The City Carrie will be replaced by confident, sweet innocence.

Do you keep a diary?
I did as a teen in the eighties. These days its all about lists. Like to do lists.

What is your favorite eighties trend?
I think the best trend of the eighties was the individuality and creativity that was explored stylistically. And the birth of designer jeans!

What was the worst?
I definitely think nude panty hose should stay buried. Even Princess Kate barely pulls them off.

Gossip Girl made headbands really happen; are there any pieces in The Carrie Diaries that will have the same impact?
Her personalized Mark Cross bag may start a DIY designer bag revolution. Also, the initial pendant, and maybe a Swatch boom.

What was your response to finding out that Dan was Gossip Girl?
I guffawed, and then went “OF COURSE GG IS DAN!” There were several clues during the seasons, but I seriously didn’t know until I read the script for the finale. Brilliant!

Since Carrie is in high school, will we ever see her signature Manolos and Choos?
Oh, I’m sure they will have a cameo or two!

What makes actress AnnaSophia Robb the ideal Carrie?
I don’t think there could be a better choice to fill those Manolos. She has a standout personality and individuality that echoes Carrie Bradshaw’s. She is so wide-eyed and enthusiastic about it all! Dressing her is a real treat.  In the fittings, and on set, she just wonderfully embodies Carrie Bradshaw.

Which designers will make their way into Carrie’s iconic closet circa teenhood?
I hope there’s an iconic closet! We should look out for Marc by Marc Jacobs, Nanette Lapour, Missoni, Moschino, sprinkled with some couture Dior, Valentino and Georges Chakra.  But the base will be a lot of fast fashion from stores like Topshop, H&M, and Forever 21.

Which designers will we never, ever see Carrie wearing?
Carrie never says no to a designer. The sky is the limit…

What do you eat from craft service while on set?
Almonds, chocolate covered espresso beans, and the occasional string cheese.

Big or Aiden?
Both!

What other characters’ wardrobes should we keep a close eye on?
Larissa is the biggest style influence on Carrie; she is the style editor at Interview.  I wanted [Larissa] to be an amalgam of Grace Jones, Bianca Jagger, and Iman: wearing Stephen Sprouse, painted by Keith Haring, and inspiring Warhol. Her character is an over-the-top, madcap Ab Fab eighties fashion icon, and the broadest fashion stroke on the show. The mean girl clique Donna la Donna and the Jens truly inspired me as well.  They are the local girls that totally prescribe to eighties mall fashion indoctrination: neon, Madonna, Flashdance. Whatever the MTV trend of the week is, they are there! Donna could walk out of a Whitesnake or ZZ Top video and be nonplussed. Tawny Kitaen, beware!

Can’t get enough Daman? The costume designer will be tweeting and posting on his blog to give followers and readers an inside look at the fashion, the designers he used, the stores he shopped at, and his overall style throughout and leading up to the episodes. Use hashtag #TheCarrieDiaries to join us and Daman tonight at 8 p.m. EST.

Rooney Mara: "I didnâ€™t try to be a style icon"