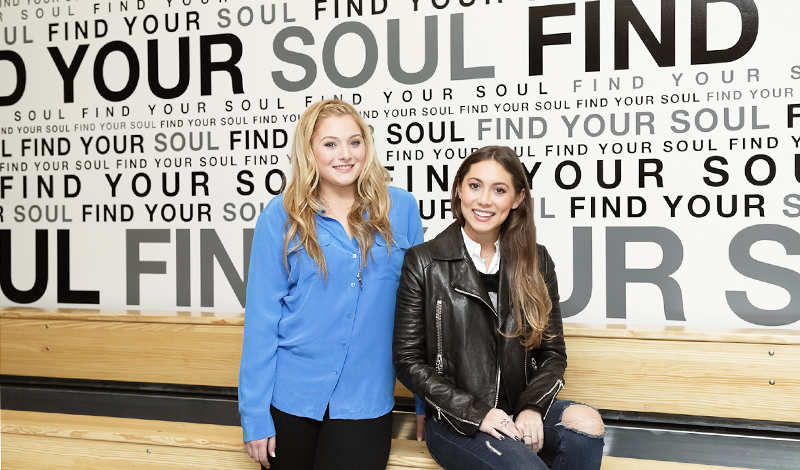 We’re taking a break from the glossy glut for this week’s Assistant Files installment to tap it back with Sofia Langan, 23, and Danielle Axman, 24, the perky, passionate pair of right-hand gals to SoulCycle’s co-founders, Elizabeth Cutler and Julie Rice. Just be prepared for a bit of office environment envy (does your company have a de facto IT team jam band, and/or an affinity for spandex during work hours?) and perhaps some workout motivation…

How did end up at SoulCycle, Danielle?
Danielle Axman: I started working at Creative Artists Agency right after graduating from the University of Wisconsin, as an executive assistant to a TV agent. I was there for almost two years, and I realized that wasn’t what I really wanted to do. I’ve always been an avid SoulCycle rider, so when someone sent me the link to this job posting, I thought, ‘I have to jump on this and give it a shot.’  I met Elizabeth, her assistant, and a few people in recruitment. It was almost like speed dating. I spent the whole morning in the offices. I fell in love with everyone. I’ve been here for four months.

What’s your backstory, Sofia?
Sofia Langan: I’ve been with SoulCycle on and off since 2010. I was their very first intern, ever, the summer after my freshman year of college. I was working at Chelsea Piers part-time, and I asked if SoulCycle needed help in the afternoons. It was such a small company back then; they said, “Totally! Of course!” Every time I was back from college, I would always lend a hand. After I graduated from Fordham University at Lincoln Center, I started working at a corporate concierge company. I felt totally overwhelmed by that job. It wasn’t really what I wanted. I really missed SoulCycle.

How did you make your return?
Sofia: I worked at the front desk of the Upper West Side location last year. On the weekends I would occasionally babysit for Julie, who’s now my boss. She asked me to babysit over Memorial Day weekend. After that weekend, she said, “I have an idea. Do you want to be my assistant?” I said yes. Julie said, “Alright, you start tomorrow.” Julie was going to L.A. for nine weeks, so my first few weeks were spent getting ready for that—plus, her New York apartment was being redone. It was kind of organized chaos, but it kept me very busy.

Why do you think you were a good fit for the gig?
Danielle: The assistant’s role is about the connection they have with their boss. I fell in love with Elizabeth’s aura. She is such a genuinely good person; you know that immediately when you meet her. She’s smart and with it—I just wanted to learn from her.

How did you two evolve into this super-assistant dream team?
Danielle: Funnily enough, we first met was over the phone! Sofia was 3,000 miles away on the West Coast with Julie at the time. It almost felt like an online dating relationship. [Laughs] We’d call each other in the morning when we woke up.

What were your early days like?
Sofia: It was sink or swim. I got Julie right away. It obviously helped that we spent the summer together in L.A. I cheated a little bit because I got so much time with her. I really learned what she likes and doesn’t like.

What might a typical morning consist of?
Sofia: Every morning, I print out a schedule and to-do list for Julie and we go over it. She usually comes in after riding in the morning, we’ll discuss her schedule if there’s time, and she’ll go right into a meeting. They have a hand in everything in the business, so each day is completely different—a whole day can suddenly flip.

How do Elizabeth and Julie’s roles differ?
Sofia: Julie deals with every retail collection, new instructors, current instructors, and some branding and marketing.
Danielle: Elizabeth handles business development, real estate, and tech stuff. There’s a lot going on with [building a SoulCycle] app right now, and with our digital platform. But Elizabeth and Julie sit in on each other’s meetings; it’s not completely exclusive.

OK, let’s discuss your riding habits.
Sofia: I ride three to five days a week.
Danielle: What’s so awesome about this company is that we’ll order in and work through lunch, but then we’ll go to the studio and take a class. That’s the greatest lunch break. We come back to our desks sweaty, but it’s totally worth it.

What’s an average lunch like at SoulCycle HQ?
Sofia: It’s a big Westville situation around here! We don’t have that many options in the area, so besides Westville, it’s a lot of random salads. We’re trying to find that perfect salad, which we definitely haven’t found yet. Also, there’s a lot of microwavable popcorn.
Danielle: And fro-yo.
Sofia: We joke we should get the Sixteen Handles-type machine in our office.

What’s the (unofficial) dress code?
Sofia: The other day, I asked two people, “Who are you riding with?” and they said, “We’re not riding.” It’s just because spandex is acceptable here! I guess I shouldn’t assume that people are going to ride—it just might have been a laundry day.

Are you partial to specific instructors?
Sofia: Because Julie deals with a lot of the instructors, I like to tag along to classes I wouldn’t normally get to take near my house or the office. [Julie] makes it a point to really know every instructor and make sure that we are putting them at the right studios—the only way to do that try them. One of the coolest parts of my job is getting to try everyone! My two go-to’s are Charlee [Atkins] and Rique [Uresti].
Danielle: I started doing SoulCycle in Lindsay [Waxer]’s class; she’s really the one who got me hooked.

Your bosses have a lot on their plates! Which part of their gigs piques your interest the most?
Danielle: The tech stuff—it’s a brand new topic for me and I find it really interesting. We’re working with really smart people, and it’s super exciting to see it come to fruition.
Sofia: My favorite part is listening to Julie talk about expansion into new markets, and finding the right talent to fit those locations.

The West Village studio is next door to your offices. Do you pop by there much?
Sofia: I make sure to stop by and say hi to the front desk most mornings. I worked at the front desk, and I know it’s definitely not a small task! I have so much respect for what they do.

There’s always so much going on at the front desks, but it seems like such a well-oiled machine. What’s the secret?
Sofia: You just say, “Yes.” You figure it out. There are very few things that we say no to.

Wow, really?
Sofia: I think the only thing you can say no to is babysitting someone’s child when they go into class. That’s come up a lot! The craziest thing I’ve probably ever done as a ‘front desker’ was stay on hold with the JCC while a customer rode to get her baby into baby swimming classes. I did it—why not? I was on hold, so I could still clean shoes at the same time.
Danielle: We want customers to come in and know that everything is taken care of, so they can just ride and not think about anything else.

What do your friends and family think of your gigs?
Sofia: My parents love it! They’re huge riders. We are a Soul family. They definitely are proud, because they love the brand. I’ve had to tell them, “I’m not signing you up [for classes] early!” They understand that, but my friends don’t understand that as much.
Danielle: I got my mom into spinning. She’s gotten into so much better shape from it, and we’ve gotten closer. She’s just a new person now, and I totally believe it was SoulCycle. I’ll also make my brothers, cousins, and aunts take classes.

Have you turned anyone into a SoulCycle junkie?
Sofia: A ton of people!
Danielle: My boyfriend. He went at 7 a.m. this morning, actually.
Sofia: My dad was a little bit hesitant initially; I don’t think he got it. He said, “I’m not sure if group exercise is for me.” He now goes six days a week. We converted him. Now, the front desk will ask me, “Where’s your dad?!”

We know you guys do Tequila Tuesdays in the office. Anything we might not know?
Sophia: Our IT team is filled with great musicians! I think they were just like, “We all play music. What might happen?” Sometimes they’ll perform at Tequila Tuesdays, or they’ll serenade a birthday girl.

Have friendships emerged on the job?
Danielle: A group of us are planning to take a hip-hop Beyoncé class on a Saturday soon.
Sofia: We always try to find something fun to do!

Do you two travel with Elizabeth and Julie much?
Sofia: The majority of their travel is done together, which is really cool, but they don’t really need our help. We do our jobs beforehand.
Danielle: They’re pretty independent.

Is there any personal stuff that’s part of the gig?
Danielle: In any assistant position, there’s obviously going to be crossover if you’re going to have a really good connection with your boss. I love Elizabeth’s kids and family. This is a family-run business! The kids will come into the office sometimes, or there will be dogs running around.
Sofia: I love Julie’s daughters. They’re like my little sisters; I feel very close with them. It would be weird if I didn’t do any personal stuff for Julie; I feel like I wouldn’t know her.

Let’s talk merch. How much SoulCycle attire have you amassed?
Sofia: An embarrassing amount. I think that I need a separate closet for it.
Danielle: Well, I recently had to get a new dresser…

Where do you see yourselves in five years?
Danielle: Definitely at SoulCycle. I believe in what I’m doing; that’s what makes me want to come to work everyday. I love the people—I think that’s really important that you love the people you work with and the office culture.
Sofia: I can’t imagine my life without working with Julie in some capacity. I’ve worked at different places, and I keep coming back. There’s nothing like it. Everyone works so hard. We’re open 365 days a year. We never close! Thanksgiving, Christmas, New Year’s…I love Thanksgiving here! It’s so special: there are Turkey Burns, which are 90-minute rides. Families do it together.

Any other special occasion rides to dish about?
Sofia: Last year, I worked on New Year’s Eve at the Upper West Side location—there was a midnight ride. Sometimes people say, “[SoulCycle] just fitness!” I’m like, “No, it’s so much more than that.”

Fashion Gets Its Own Version of “Shitty...