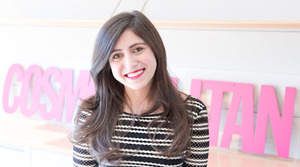 (NEW YORK) Another Thursday, another dishy glimpse into the life of an assistant! We kept it digital this time around, stopping by the offices of Cosmopolitan.com to chat with Tess Koman, the trusty editorial assistant to the site’s editor, Amy Odell. So what’s it like to be immersed in a world of cats, Beyoncé, viral videos, and sometimes saucy content? There’s a whole lot of tweeting involved, ample on-screen cameos on Cosmo’s various web vids…and occasionally, Koman writes posts that she definitely isn’t sending along to her parents.
BY DENA SILVER

Tell us about yourself, Tess!
I’m from New Jersey, and I still live there, but I went to Union College in upstate New York where I studied English and Chinese. I always knew I wanted to do something with magazines, but I never knew what, so I applied for everything under the sun once I graduated in June.

Where did you intern pre-Cosmo?
First I was at Life & Style, which was based in Jersey. That was an experience. Since it was a weekly magazine, things moved really slowly. Then I landed at PopSugar and that kind of gave me a whole new idea of what it was like to work in digital, because the pace was much faster. I loved working there and it helped narrow my search towards digital-based jobs.

How was your interview that nabbed you this gig?
I interviewed during Fashion Week in September and wore the one Theory interview dress that my mom insisted I buy! I was a little overwhelmed, but as soon as I sat down and met with Amy and Annie Fox, I felt at ease. They asked me a lot about my social media presence and my pop culture obsessions. Amy called me three hours after the interview to let me know I got the job.

Were you intimidated by Amy the first time you met her?
I’d Googled Amy and saw that she had 35,000 Twitter followers. I realized that she was a huge deal in a world that I really knew nothing about.

How do you start off your days?
I get in around 8:30 a.m., which is about an hour and a half to two hours before anyone else gets in. I try to tackle my administrative stuff first; I do the office expenses, all the invoicing for new people, and all the contracts. Amy wants me writing every day, so she has me pitching blog ideas, preferably by 11 or noon, and eventually I write up a post. I also help with the video production. I build whatever needs to be built for the site, and I update the homepage three times a day. There’s a lot going on and I’m normally here until 6:30 p.m. I have a very long commute, but they gave me a Wifi thing for my computer, so I work on both train rides, and if I need to, I’ll work when I get home.

What’s Amy like as a boss?
She’s good with giving me feedback, whether good or bad. I love how upfront she is. She’s really somebody who knows what she wants and is good at conveying that. My friends who are editorial assistants elsewhere don’t get along with their bosses or appreciate them as much.

What are Amy’s pet peeves?
Inefficiency. She also doesn’t like things that aren’t empowering to women.

Do you fetch Amy coffee or lunch?
No, but I would if she asked me.

Do you assist other Cosmopolitan.com eds?
I help out Alexandra Martell, our managing editor, a lot. I help Kathleen Kamphausen on photo, with producing whatever needs to be produced for the site. Since we’re doing so much video content now, I’m helping with that every day. They also told me that I’ll be in charge of the summer interns when they arrive.

How much of your writing makes it on the site?
Anything I submit is generally edited and put up, but I’ve had a few talks with Amy on honing my blogging skills. I’m aiming for daily pieces.

Are there any limits that are off limits for the site?
No, not really!

Does your family give you feedback on what you write?
I send anything I write to anyone who will read it, to drive traffic. My parents always have something to say about my posts, but I recently wrote about the average size of an erection, which I did not send to my father.

The site’s ramped up the video content recently! When did that happen?
When I got here, I was the eighth person on the team. Now there are about 25 people. When we started doing CosmoLive, that’s when the video content started picking up and people started noticing it more. Cats + Abs was a huge thing as well.

What’s Cats + Abs?
It was this music video we made with three beautiful shirtless men holding kittens and rapping about them. It went a little bit viral and got picked up by a few places. I was proud to be a part of Cosmo.com when that happened.

Cats seem to be a huge thing here.
Yeah, basically everyone here is a crazy cat lady. Also, Beyoncé is a very serious thing.

Have you starred in any of the videos?
There are videos of me on the site, and they’re really something. I’m in this series called ‘Millennials,’ where Elisa Benson and I just speak in internet language. Apparently Joanna Coles liked them, which is why we kept doing them.

Is there any big news on the video front?
A lot of the focus is going to be on a daily show.

Do you read the comments on the site?
I find that people on the internet are stupid, most of the time. If I’m writing about news I’ll check the comments, but if I’m talking about something personal, I won’t.

You wrote a story about sorority hazing that went viral. What was that experience like?
On my second day here, back when I was full-time freelancing, I wrote an article about sorority hazing that blew up my little world. And I’m pretty sure that article got me a full time job. I like to think that it showed Amy that I had the balls to write something like that. But at the same time, everyone here was unbelievably supportive. They made sure to go out of their way to ask me what was going on.

Were other media outlets contacting you about the post?
I was supposed to go on Good Morning America, which was unreal.

How did that affect what you will and won’t write about now?
Starting with the hazing article allowed me to set boundaries for myself. Although now I feel like I would write about almost anything.

How important is social media to this gig?
We’re told that it’s part of our job to tweet, so we do have to be tweeting all the time. We’re literally sitting on Twitter all day just reading what’s happening. Amy encourages us to be a part of the conversation. I feel like Twitter has been engrained in my head.

Since you started here, how has your social media following grown?
I came here with 190 followers and I was verified around 400 followers. Now I’m at like 2,300 followers.

Do you ever fight about who has the most Twitter followers in the office?
It comes up once in a while.

How often do you tweet from the Cosmo account?
I love doing social, but it’s really stressful because of the timeliness and our traffic goals. I try to pre-schedule all of the tweets; so sometimes on a Friday night, I’ll sit with a bottle of wine and just tweet out the weekend for four hours.

Do you ever interact with other assistants on the print side?
I don’t think I’ve actually physically met any of them. We’re very much our own little world here.

How about Joanna’s right-hand man, Sergio Kletnoy?
Obviously I know who he is, and I’ve met him in passing, but I don’t know much about him otherwise. I remember thinking he was a lot of energy and really awesome.

Does he contribute to the site at all?
Anytime he does a celebrity interview, he’ll send it to us to post online. And those pieces have always done well.

So we hear that Amy’s engaged. Does she talk about the wedding often?
Yes, oh my God it’s so exciting. Lori Fradkin, our executive features editor, told us that she had a Funfetti cake at her wedding, so we were trying to peer pressure Amy into have one at her wedding, too.  But we’ve all seen her dress and we love it!

Where do you see yourself in five years?
I was talking to Amy about this the other day. Since I’m so happy here, it’s hard to think about that. I don’t know if I want to write or edit, but it’s one or the other. I like being part of a team, so I can’t ever imagine freelancing or going out on my own.

Did You Make The Business of Fashion...