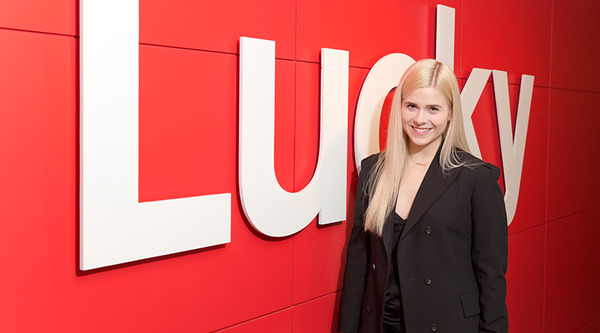 (NEW YORK) It’s only fitting that the youngest editor-in-chief in the fashion glossy world has an equally youthful assistant, non? Lucky’s Eva Chen tapped Kristie Dash to become her assistant, social media notifier, and precise scheduler, all while Dash was still in college. Now with a diploma in hand, Dash is perfecting the science of the assistant, from difficult coffee orders to frequent run-ins with Anna Wintour.
BY DENA SILVER

How did you end up in New York?
I’m from Pittsburgh, and I grew up as a very serious dancer, which was the reason I wanted to move to New York. I studied at Pace University and majored in communications. Starting in freshman year, I started looking into internships.

Where did you land your first internship?
At Harper’s Bazaar. I ended up working in the fashion closet and something just clicked for me. I realized that although fashion was hard to break into, dance was just not going to happen for me.

How many other internships did you have during college?
I had seven internships over my college experience. I always knew that I wanted to try out writing, so I worked at Celebuzz, NBC, E! News, and as a fashion week intern for Fiji Water. Then I got an internship at Teen Vogue, and after that, Eva helped me get a beauty internship at Vogue.

How did you get the job at Teen Vogue?
I emailed 20 editors on the masthead at Teen Vogue, because I really wanted to work there. I had followed Eva on social media and knew she seemed amazing, so I emailed her about a tweet she sent out the week before, about the song “Moves like Jagger”, being stuck in her head. The subject line read ‘I have that song stuck in my head too.’ It’s so embarrassing to look back on, but it clearly worked!

What were you doing after Vogue?
I was studying abroad in Norway this past summer, just roaming and frolicking around Europe, when I got an email from Eva. The subject line was ‘When do you graduate again?’ with nothing in the body. I had no idea what that meant. So I sent her this crazy-long email, about how I technically wasn’t graduating until December of 2013, and I didn’t hear anything back from her.

Oh, no! What happened next?
Three weeks later that I saw the announcement that she was named editor-in-chief of Lucky all over Twitter. Two days later, she sent me an email: the subject line said, ‘When you get back from your studies in August,’ and the body of email read ‘I would like you to be my assistant at Lucky.’ I responded immediately after to accept the job.

Did you start with Eva on her first day as EIC?
I was still traveling at the time and she wanted me to finish my “being young thing,” as she calls it. I ended up starting during fashion week, about two months after Eva started. When I started I was still in college, but I was taking all my classes online. I would finish my days around 7:30 at Lucky and then have to do schoolwork.

What was it like taking on the job, sans an interview?
Nerve wrecking! I was nervous about Eva’s expectations of me, and I really didn’t know what to expect. I was friends with Amy Astley’s assistant at Teen Vogue, and she gave me an idea of what the position would be like.

How did Eva prepare you for the gig?
She told me that I would be serving as a lot of different positions for her; as her right hand girl, but also her therapist, and her Perez Hilton, who alerts her of everything that is happening.

What was fashion month like?
I basically felt like I was drowning the entire month. Eva runs around like a crazy person. When she goes to Europe, it’s difficult to be ready for her needs with the time difference. While she is really self-sufficient, I want her to come to me if she ever has a problem.

Did you shift your sleep schedule while she was away in Paris and Milan?
At one point, I would set alarm clocks for 4:30 a.m. to check my email and see if anything was happening. Usually there wasn’t. But once there was a minor issue, so that proved to be helpful.

How do you start off your days?
I usually get in right before 9 a.m.; Eva has a breakfast almost every single morning at 8:30 a.m., and I schedule them months in advance. I get into the office and check my millions of emails and manage her schedule. She has up to 15 meetings a day, back-to-back, and I have to arrange them with military precision to keep her on schedule. Besides that, I’m pretty much a liaison between her and the other editors, so I’m scheduling staff meetings as well as meetings with photographers, designers, and PR people. I rarely ever leave my desk!

Do you leave your desk to run out and get food?
There is so much food that comes into our office. So while we always have macarons to eat, I also run down to the cafeteria if needed. I do have a little refrigerator under my desk that I usually just stock with things, so I don’t have to leave my desk too often.

Do you ever have to run out and get Eva lunch?
We order in a lot, but Eva’s lunches are the same deal as her breakfasts: She usually has them scheduled months in advance! The only time she’ll eat in the office is if something got canceled, and then she’ll order food to the office.

What about coffee?
Eva doesn’t really drink a lot of coffee, but she drinks a lot of tea. So we have a kettle that I’ll boil water in for her. On busy days, she’ll ask me to get ‘her drink.’ It is always a big, long, complicated order that’s really embarrassing, but the people at Starbucks always know what to expect when I come in.

Are there any particular assistants that you are close friends with?
From interning four years ago, all of the interns that I worked with are now assistants. It’s fun to all get back together and see what everyone’s doing. My roommate and best friend is an assistant at Cosmo.

It’s a pretty minor age difference between you and Eva. What’s that like?
We’re interested in a lot of the same things; we both watch The Bachelor and the day after it airs, we congregate about what happened on the show. Our relationship is very friendly, and I’ve referred to Eva as my fairy god cousin, and hopefully she will be for the rest of my life!

Aside from assisting Eva, do you do any other things at the magazine?
At this point not a lot, but that’s starting to change. I started this thing on social media that’s ‘30 days, 30 lipsticks’ and every day I Instagram about what lipstick I am wearing. I started writing something for the Lucky site on that, so hopefully that will lead to more writing soon.

Does Anna Wintour ever stop by?
She does, especially since she’s working with Lucky right now.

What was meeting Anna for the first time like?
It was my second week on the job and I heard her coming down the hallway with Eva. I was typing and doing my work, and Eva goes ‘This is my assistant Kristie.’ Anna Wintour stuck out her hand and was like ‘Hi, I’m Anna.’ I stood up and shook her hand. It was a great handshake. It was an honor to have her around!

Does Eva tend to keep her old assistants around?
Eva is known to be a mentor to her assistants. Her former assistant, Laurel Pantin, was her assistant at Teen Vogue for beauty, and she’s now a market editor at Lucky. Maura Lynch, our beauty editor, was also one of Eva’s first assistants.

Gotcha! Where do you think that you’ll be in five years?
I want to stay at a magazine. I would love to stay at Lucky or within the Condé Nast family. I think I want to be writing and in the beauty department. Eva expressed that once I’m really settled in, she will help me figure that out. I am very Lucky…pun intended.