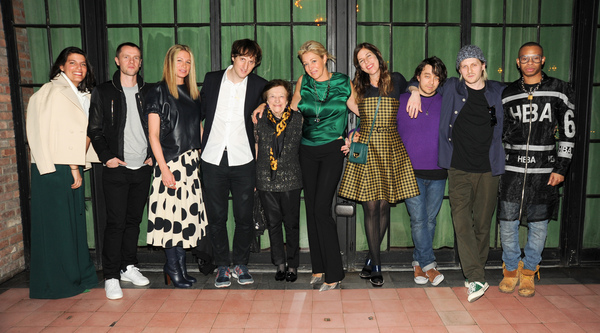 (NEW YORK) Think awards season was over after the Oscars? Not in our world when Raf, Marc, and, Tom still have a little room on their mantel for fashion’s greatest prize. Last night, The Council of Fashion Designers of America announced the 2014 CFDA Fashion Award nominees and honorees at a cocktail party at the Bowery Hotel, hosted by the industry’s godmothers, Diane von Furstenberg and Nadja Swarovski, who is sponsoring the show for the 13th consecutive year.

Quite a few familiar names are up for the top awards again this year such as Marc Jacobs and Alexander Wang, who are both nominated for Womenswear Designer of The Year. Some new faces, and Daily faves, such as Rosie Assoulin and Wes Gordon, enter the mix for the first time in the Swarovski category. Tom Ford is set to receive the Geoffrey Beene Lifetime Achievement Award and The Founder’s Award, in honor of the CFDA’s founder, Eleanor Lambert, will go to Bethann Hardison, an advocate in putting diversity on the runway.

At the Bowery to see who’s up for The Trova, considered the industries highest achievement, included past winners Anna Wintour, Michael Kors, and Carolina Herrera. The nominated lot is chosen by a guild of industry peers including their 450+ members along with fashion journalists, stylists, and retailers.

This year, hosting duties will be in the hands of cult director John Waters, proceeding recent hosts Andy Cohen and Seth Meyers, last seen at the show in 2012 when he he accepted awards (and stole the show) on behalf of Johnny Depp and Rei Kawakubo in 2012. “He was a presenter two years ago and was such a huge success that we asked him to take over the show,” CFDA CEO Steven Kolb told the packed crowd that also included Cushnie et Ochs’ Carly Cushnie and Michelle Ochs, Creature of The Wind’s Chris Peters and Shane Gabier, Hamish Bowles, Virginia Smith, Adam Glassman, Rebecca Minkoff, and Jennifer Fisher. The always star-studded CFDA awards return to Alice Tully Hall at Lincoln Center on June 2nd. Now the question is, what to wear…
BY EDDIE ROCHE

The Media Award in honor of Eugenia Sheppard: Paul Cavaco