The 2013 Oscars, Dissected Gown by Gown 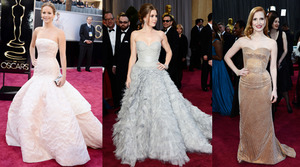 (NEW YORK) From a certain snub of a last-minute dress switch-up—Anne Hathaway and Valentino, of course—to oodles of song and dance numbers (A not too uncommon overheard from last night:“Is this the Oscars or the Tonys?) to a First Lady cameo, the Oscars went down last night leaving plenty to discuss during and certainly after the last statuette was handed out. Who wowed us, which gowns befuddled a bit, and who was missing from the step-and-repeat grind? Without further ado…
BY ALEXANDRA ILYASHOV

Charmed in Pink: What are the odds that 2013’s major female wins—Jennifer Lawrence for Best Actress and Anne Hathaway for Best Supporting Actress—both opted for pale, ballet-status pink for the big eve, in Dior Haute Couture for the former and Prada for the latter? With back-grazing joillerie (see below) to boot? Interesting…Pantone experts and/or psychics, we’d love your color-centric insights, s’il vous plait.

Pretty in the Front, Party in the Back! The Oscar set seemed to be all about a surprise view from behind, specifically via back-grazing joaillerie, whether the baubles were sewn into the frock (hello, Helen Hunt and that navy H&M couture number?) or dangling far past the shoulder blades, a la Jennifer Lawrence and Anne Hathaway. Jennifer Garner’s plum Gucci dress had a deceptively simple head-on first impression, revealing a delightfully massive bustle lining the back. Renee Zellweger went the Carolina Herrera route, to the shock of absolutely no one, in a shimmery sequined champagne-hued number tied together with

Embellished Brigade: On the most heavily wrought end of the gown spectrum, Nicole Kidman’s truly weighty-looking L’Wren Scott was, well, a piece of work; Naomi Watts knocked it out in that spangled Armani Prive dress, arguably winning the “most difficult to wear flatteringly, much less gorgeously” honors du evening, thanks to some riveting but tricky-looking one-shouldered action. Futuristic but not ugly: well done! Halle Berry in a strong-shouldered, vertically striped and totally embellished Versace frock was also pretty in the same slick, angular, sharper-edged manner as Watts’ look. Zellweger’s golden Carolina followed sequined suit, and Kerry Washington’s Miu Miu pick involved some dazzling crystal-encrusting on the bodice of a vibrant poppy-hued, otherwise simple column silhouette.

Very Well Red: Circling back to that intriguing, drama-imbued switch-up of Hathaway’s planned Valentino number—which the maison had hyped up in a press release earlier in the day—for Prada, purportedly due to similarities between Hathaway and Amanda Seyfried’s cool-toned, halter-necked Alexander McQueen number. All is not lost! Valentino did dress Sally Field and Jennifer Aniston, rendering both actresses visions in bright red couture perfection.

Winning, By The Numbers: Two mentions for Alexander McQueen (Salma Hayek and Amanda Seyfried), two for Armani Prive (Jessica Chastain and Naomi Watts)—plus another nod for dressing pint-sized nine-year-old Quvenzhané Wallis (though the puppy purse was not, in fact, a Giorgio creation); 1.5 for Naeem Khan (Stacy Kiebler and Michelle Obama, though the First Lady’s gorgeous grey beaded confection was shown via video…)

The ‘Where Art Thou?’ Designers: Lanvin, which dressed statue-scorers Meryl Streep and Jean Dujardin last year (perhaps Alber needed a break after the coup of dressing the Best Actor and Best Actress winners, non?). Also MIA from the tapis rouge for the second year in a row: Chanel and Narciso Rodriguez. Tom Ford and Givenchy, were also were absent from the gown grind.

Peruse our Gallery to take the looks in again!

Shot of The Daily: Mario Testino and The Girls