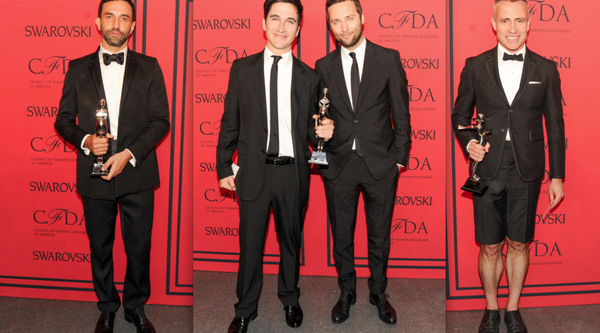 (NEW YORK) Wondering who won big at last night’s 2013 CFDA Fashion Awards, held at Alice Tully Hall. Firstly, a note on the presentation factor: if you’re looking for evidence of the event’s ever-expanding magnitude, consider that former secretary of state and first lady Hillary Rodham Clinton presented the Eleanor Lambert Founders Award to her longtime friend, Oscar de la Renta. Also, even the toughest critics seemed jazzed about the event: Cathy Horyn wrote in the New York Times today that this was the smoothest awards ceremony from the CFDA to date. With the demise of Fashion’s Night Out, word on the street is that Vogue‘s big public relations focus is now aimed through events with the CFDA. One simply has to assume Anna Wintour and her extensive political dabblings had to do with Mrs. Clinton’s appearance, non?

Of course, de la Renta was just one of many CFDA award winners of the evening. The big award for womenswear went to Jack McCollugh and Lazaro Hernandez of Proenza Schouler, which was the duo’s fifth CFDA win (in just 10 years on the scene). Proenza power, evidenced yet again! Another not so surprising (but much-deserved!) win went to Thom Browne for menswear. Phillip Lim took home the prize in the accessories category for 3.1 Phillip Lim, Vera Wang was honored with the Geoffrey Beene Lifetime Achievement Award (presented by Ralph Lauren), and fashion critic Tim Blanks who was presented with the media award by Linda Evangelista.

The list continues: Riccardo Tisci was presented with the International Award for Givenchy by Jessica Chastain, and she wasn’t the only major Hollywood player in the room in presentation mode: Kerry Washington gave the Proenza boys their honor, Ethan Hawke presented costume designer Colleen Atwood with the Board of Directors Tribute, and Hailee Steinfeld presented the Swarovski’s emerging designer awards.

As for Swarovski’s up-and-comers, the emerging talent awards went to Max Osterweis and Erin Beatty of Suno for womenswear, Dao-Yi Chow and Maxwell Osborne of Public School for menswear, and Pamela Love for accessories. And while they might be considered the new kids on the block at the CFDAs, Swarovski’s latest slew has made a splash prior to last eve. Bravo to all!