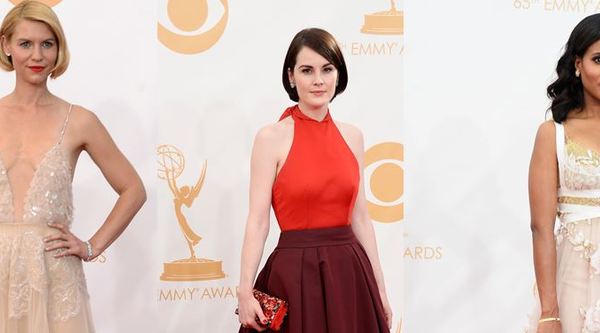 (NEW YORK) To some, the Emmy awards are all about celebrating the winding plot lines, well-developed characters and the drama, while for others, the red carpet arrivals are just as important. The Daily falls into the latter category, where dress seams get discussed as closely as actors study their lines. Without further ado, we present our recap of the red carpeted step-and-repeat.

Flower Power: The belles of the small screen were as fresh as a rose bouquet, donning gowns covered from head to toe in blooms. For starters, Lena Dunham rocked a teal Prada gown with pink blooms tumbling down the full skirt. Mad Men star Kiernan Shipka has been blossoming on the fashion scene for the past few years, and her age-apropos Delpozo gown followed suit with both floral prints and appliques. For a more minimalistic take on floral, The Good Wife’s Julianna Margulies’ black and white column dress was simple and to the point.

Pretty in Pastel: Right on trend with not only the Fall 2013 runways, but also the Spring 2014 catwalks, muted tones quietly stole the scene. Rose Byrne went for a pale blush two piece by Calvin Klein Collection, baring a sliver of her abs in this crop top number, while Zooey Deschanel iced out in a light blue silk J. Mendel gown.

Fresh Off The Runway: Without skipping a beat, Kerry Washington was wrapped in tulle, ribbon, and blooms confection of the final gown that floated down the Spring 2014 Marchesa runway in the New York Public Library. Jessica Paré snagged her sea-blue Oscar de la Renta strapless number straight from the runway, although the high front hem revealed that the Mad Men femme fatale went with a darker pair of heels than the designer originally chose for the look.

Sparkles Galore: Decked out in a Fall 2013 look, Heidi Klum sparkled in her Versace Atelier gown, which featured all the necessary bells and whistles for a night on the town: a vampy neckpiece, a super tight bodice, and a manageable train. Taking home a golden statue for Veep, Julia Louis-Dreyfus shimmered in a strapless column dress by Monique Lhuiller. Also a winner of the evening, Claire Danes sparkled in her Armani Privé dress, which featured a low-cut top covered in pale paillettes that was anchored by a full lacy skirt. Julianne Hough played up the romantic side of things, with her grey off-the-shoulder Jenny Packham gown. The sheer beaded skirt of which perfectly matched her pearl-embroidered clutch and revealed a pair of risqué underpinnings.

Chicly Colorblocked: Two Emmy femmes dabbling in stark color contrasts? Elisabeth Moss and Anna Gunn. The Mad Men actress paired her two-toned Andrew Gn gown with some platinum blonde highlights and a bold red lip while Breaking Bad’s Gunn accepted her Emmy for outstanding supporting actress in a lacy Romona Keveza number that paired noir with pale pink. Stepping away from the tame and into the bold, Michelle Dockery stunned in a red and burgundy Prada gown that featured a brilliant halter detail and a luscious flowing skirt.

Shot Of The Daily: Armani & His Girls

Alexander McQueen Gets An Uptown Revamp